Yesterday was a great conclusion to a hectic week. Week 8 marked the middle of the semester, and spending Friday night with a bunch of friends was a rather interesting idea.

So I invited a bunch of my friends to see Twelfth Night by William Shakespeare. As I said in my previous post, this will be the first Shakespeare play that I will be seeing completely, as a play. The other plays I have seen in different forms, say, as a movie, like Romeo and Juliet (and yes, I saw the old version, not the one by DiCaprio), or Much Ado About Nothing. So I was quite unsure what to expect.

Anyway, we went to Friday's to have dinner before going to the theatre. The fact that we had eight people in our party made it a little difficult to get a table, and since we were time-constrained, we decided to split the group into two tables of four. That was an interesting set-up. I almost fooled someone in our group that the country Khrakozia actually exists.

Anyway, we went back to campus after dinner, and then entered the theatre. They did a rather anachronistic interpretation of the play. The actors were not dressed in period costumes, but they mixed different elements from different periods in time. Which was ok, it was after all a comedy. I suppose having the Duke Orsino dress up in a speedo with the word DUKE written on his butt was rather hilarious. And when the second act opened, and Feste was on the balcony, and said I could see Russia from here!, the audience laughed out loud.

So there, the play was hilarious, and a comic end to a hectic week. 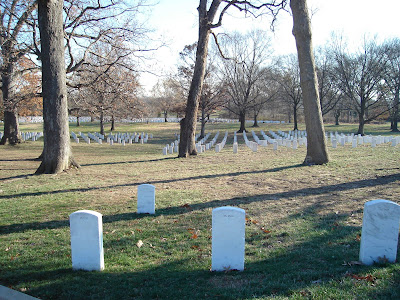 (Watching the Dead, from my Arlington Cemetery Series)