This weekend was a rather eventful one for the university's Department of Music. The reason for this is due to the series of concerts and recitals dubbed Autumn Timbres. All concerts are free and open to the public. The concerts started last Thursday, and there are still some that will be staged tomorrow.

However, I didn't try to attend every single one of them, given I wasn't interested in all the genres that are being performed. I wanted to attend four concerts, starting Friday evening, but due to a schedule conflict, I was only able to attend three. Unfortunately, I had to miss the Contemporary Ensemble.

So, the first concert I attended was yesterday night's Percussion Ensemble. This was a rather eye-opening act. I hadn't been to a percussion ensemble concert before, so I didn't know what to expect. Upon entering the hall, however, I figured that it would be a rather interesting night, due to the fact that there are plenty of automobile brake drums, a washboard, different types of mallet instruments, and other interesting pieces on the stage. It ended up to be a concert featuring pieces by Lou Harrison, an American composer who was best known for writing pieces for just intonation instruments. The night ended up to be very rhythmic, and the instruments were very modern-sounding. It's not your typical Mozart evening I should say. I enjoyed this one a lot.

The second concert was this afternoon, the concert by the Klezmer and Tango Ensemble. Now, before listening to this concert, I never knew what a klezmer was. Apparently, it is Jewish secular music. Now this was a concert that was hard to digest. Each piece was wonderful separately. They performed the tangos well, and they even had dancers performing on the stage. Carlos Gardel was represented, and there were a lot of different milongas as well. The thing that I find puzzling is the fact that they juxtaposed klezmers and tangos together. Taken together, the concert was giving me a sort of cognitive dissonance. One piece takes me to Buenos Aires and the next piece takes me to underground Yiddish bars in Brooklyn or in Eastern Europe. The next piece throws me to the South American city again. My brain couldn't exactly find the common denominator.

The third concert I attended was this evening's Chamber Recital. Three student groups performed the following: 1) Beethoven's Trio in B-flat Major, Op. 11 for piano, clarinet, and cello; 2) Beethoven's String Quartet in F Minor, Op. 95; and 3) Shostakovich's String Quartet in C Minor, Op. 110. I liked the first piece; the pianist was very crisp in playing her notes, and she did a great job in interpreting the differences in dynamics that the piece required. The clarinetist also her held end as well, and the cellist was also brilliant. The mix of the different instruments was rather entertaining. The second piece was rather disappointing. I noticed a lack of communication between the four players; they did not know how to play as a group. Granted, they were playing a string quartet from Beethoven's late period, but it seemed that the dissonance that was heard was not intended by Beethoven. They did not let the piece shine, and they did not let each musician talk. It was rather chaotic. However, the best piece of the night was the Shostakovich. The piece was rather modern, and was hard to interpret. However, unlike the previous quartet, the four musicians were all breathing in unison, giving and taking cues from each other. I could see that they were all looking at each other, making sure that they were all at the right place. When one musician needed to do a solo, the other musicians let him or her talk. Each musician was giving whoever it was that needed to do the solo due attention. The performance showed maturity and that these student musicians know their stuff.

So there, it was a rather musical weekend for my part. I suppose I am fortunate that these diversions are available, so when I needed a break from my brain waves, I could just go to the next building and listen to some excellent music. 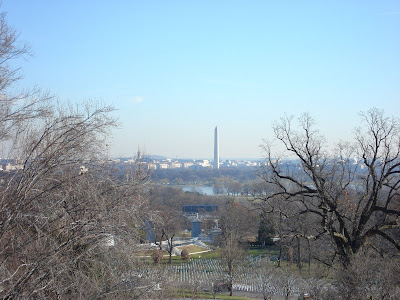 (Scenic Needle from the Graves, from my Arlington Cemetery Series)