I got my two papers that I turned in back. The thing is, this is my strategy to getting a better grade. I write a paper early in the semester. Not that I write it haphazardly, but I write it with the intent that it is the final version. I then turn it in way in advance, telling the professor that this is my final paper. If he can read it and suggest comments and things I might need to revise, then I am willing to revise it and write a better paper. Thus, I can optimize my work within the span of the semester. And that worked for my two classes. Therefore, I am using the last two weeks of the semester to revise my two papers.

One of these papers involve a neurolinguistic paper. Due to the fact that neurolinguistic studies are hard to implement if one is not in a lab, the paper requirement for this class involves designing an experiment and making predictions and discussing its theoretical implications.

So for my paper, I designed an ERP and behavioral experiment that would explore the neural and behavioral correlates of causal relations. That means, this study will investigate what exactly goes in the head of comprehenders if they encounter discourses like Max fell. John pushed him.

First, a note on ERP. ERP stands for event-related brain potentials. This is the actual measurement of the electrical activity that goes on inside the human brain. If you are familiar with electroencephalograms (EEG), then it is of a similar procedure. The participant wears an elastic ERP cap, where there are plenty of nodes that are attached to different parts of the head, measuring the electrical activity of the brain.

Now, there have been findings that different types of stimuli trigger different types of ERP waves. One such wave is the N400, which is called so due to the fact that it is a negative wave that appears approximately 400 milliseconds post-stimulus. Thus, if one reads a sentence like The boy took a sip from the waterfall., then the final word of the sentence will elicit an N400, since that is rather unexpected, and semantically incoherent.

I am capitalizing on this factor, since I predict that humans have an expectation that events happen chronologically, and therefore they expect discourse to proceed in a chronological order. However, it is not always the case, such as in the mini-discourse that I have given above, where the second sentence is not describing an event that occurs after the first sentence, but rather describes an event that occurs before, thereby causing it. Thus, I predict that comprehenders will encounter a momentary pragmatic incongruity due to the violation of chronological expectation, and therefore it will elicit an N400 component in the ERP wave.

I suppose I should not repeat my whole paper here, since this is a blog after all, not an academic journal. But, I suppose I am frustrated due to the fact that I really cannot run my experiment as it is, since I do not have access to an ERP lab at the moment. But, who knows? I'd love to measure your brain waves if I can. Who knows what I would find? 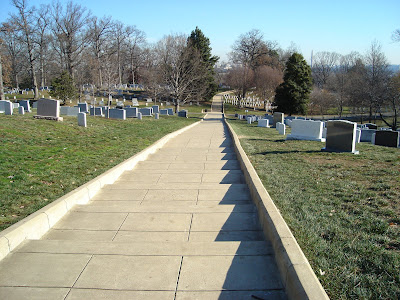 (The Path Down, from my Arlington Cemetery Series)