A conversation I had with a good friend of mine just an hour ago made me want to blog about this topic. I suppose the concept of motivation is just very basic to us humans, but the way they interact with our lives is very different from one another.

My friend and I were on our way back from downtown Buffalo. We watched a play entitled Tromping on Sacred Ground, by Susan Dickie. It happened to be the World Premiere of that play. It concerns about the scientist Thomas Huxley, and how he had scandals with the religious organization in Oxford, for supporting Charles Darwin's theory of natural selection. In short, the play emphasized the importance of considering evidence over dogmatism when investigating which belief to support.

Anyway, that is not why I wanted to blog tonight. But rather, it was about a conversation we had while we were in the car. She told me how different people around her encourage her to move forward with her work. She then is worried that what would happen if no one is around to push her forward? She also asks whether it is a good thing to be pushed forward, because that makes it look like we are puppies, and we simply operate on a reward-and-punishment system.

The thing is, I do believe that humans operate on a reward-and-punishment system. There is this thing called motivation. If one does not see the worth of pursuing one thing, then chances are the person will stop pursuing that thing. However, if the person sees that there is a reward at the end of the tunnel, then the person is more willing to undergo the difficulties of the task. Simple psychology.

Now what if there is nobody to tell oneself that there is a cookie at the end of the tunnel? Then one must learn to motivate oneself. My friend asked me this, how I motivate myself. I then reminded her of the incident in which she caught me tuned out, and she asked what I was thinking. In fact, I was daydreaming. I was daydreaming of what life would be say 5 years from now. I suppose 5 years from now, I already have my degree, and I am doing research in an institution in Europe perhaps, ideally. I have a lab in which I work in, and I am designing experiments testing human cognition and language. Perhaps I have a couple of publications under my belt, and I am cited by other scholars. Perhaps I also have a cool apartment in the middle of the town, and I enjoy my St. Agur together with some wine.

For me, that is real. That is my cookie at the end of the tunnel.

Motivation is powerful. The key is finding what you really want, and going for it. 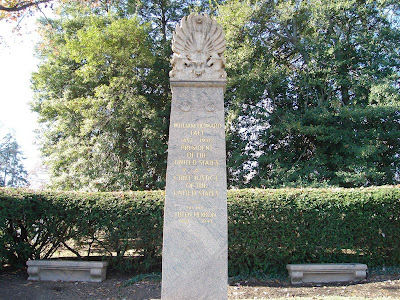 (Taft, from my Arlington Cemetery Series)