For a person that doesn't really care about social norms, I spend a lot of time talking about it, and wondering about it.

That was at least an observation that a good friend of mine had, earlier.

I suppose this is not the first time I wonder about social norms and constructs. Before, I blogged about how I construct my social world, dividing my world into three tiers, the close group, the neutral group, and the danger group. And like I said there, most of the close friends that I have belong to the close group, and most people, including strangers belong to the neutral group. And some people who I positively evaluated as dangerous belong to the danger group. These are the three main distinctions that I make in order to know how I would deal with people.

Another stratum I suppose that I make is two-fold, that is, if I care about the person or not. Unlike the previous strata which consists of three groups, this only consists of two. Basically, one group has the people I care about, and the other group has the people I don't care about. Usually, I do not care what other people think. Do I wear my heart on my sleeve? Maybe. I perhaps am known for speaking what I really think about, and I rarely filter my thoughts. If it hurts people, if those are people I don't really care about, then what the heck, I don't care. But if I do something and someone I care about gets hurt because of that, then I would tone it down and even stop it.

To give an example: a friend of mine was rather pale. With a straight face, I told her, "You look like you have been blood-let." She laughed, but she also didn't know what I meant, to which I clarified, "It was my way of asking whether you're okay." Yes, I usually do a round-about way of speaking, violating Grice's (1975) maxims big time. Was that offensive? Maybe, maybe not. If my friend gets offended, then I would stop, but if a person I don't care about gets offended, well, too bad, life sucks buddy, get it over with.

Life is short. I cannot please everybody. I suppose this is more of a pick-and-choose thing, picking which side I am, and behaving accordingly. It's a type of social give-and-take. I do not need anything from the people I do not care about, so I do not invest in them. If I think I would be needing something from them later, then yes, I might be more sensitive to their limitations. But if I do not need anything, then what's the point of investment?

It reminds me of conversations between me and other friends, about altruism, humans being good or evil, and other things. I suppose taking an economic view in human behavior is what I am rooting for, although I do admit that this is a theory that is rather hard to test. Yes, there are people who give to charities. To which I would argue that they actually have the need to give to charities, and what seems to be altruism is just self-gratification. That is they do not get satisfaction or some other form of enjoyment in doing it, they would not do it. But then, arguing it this way makes it a little hard to prove or test.

Ok, this is getting too philosophical for a Friday night. 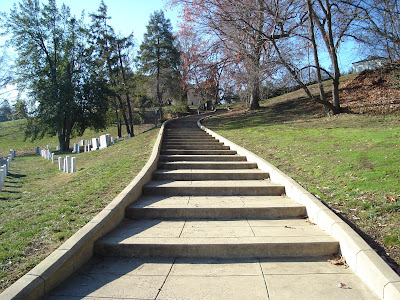 (The Path Up, from my Arlington Cemetery Series)