Okay, okay, I know that the official start of winter is December 21. At least that is what the calendar says. However, for me, I suppose the beginning of winter is the first time snow has actually accumulated on the ground. And that happened to be yesterday.

I suppose this was the first time that snow actually fell and remained for a while. Earlier, there have been a few instances of snowfall but they didn't really remain in the ground. I suppose it was cold up there to snow, but warm down here to remain in that state. Now, it is different.

So the weather forecasts about freezing temperatures for this week. That's why the evening is pretty, and the snow is falling. The clouds are hovering, and the flakes are descending. I know, I must be a masochist if I like the view, but somehow, its exotica trumps everything else.

So there, winter is officially here, according to my book. My gloves are out, my snowcap is ready, and my boots are deployed. Time to bundle up again.

I suppose the fact that the seasons change make me feel that time moves really fast. Well, I know it is just an illusion, but if you live in a tropical country, where the weather is pretty much the same all year, then the feeling is different, than if there is a visible cue of time passing by, such as the weather. You know, one can count, such as in my case, this will be the fourth winter I am spending here. But if I were in a tropical country, what would I count? Typhoons?

I watched the latest episode of The Amazing Race a few hours ago. This time, the remaining teams are in Kazakhstan. I love the show for not failing to give me exotic locations. I also love the show for endlessly showing Americans that are politically incorrect and have low traveler's IQ. I suppose I hate the fraternity brother team, where they described the local Kazakhs as horrible people, simply because they did not understand the English that the team spoke. I actually hated the outcome of this episode. I would rather have Andrew and Dan get eliminated than Terrence and Sarah, given the fact that Sarah consistently showed an effort to learn local expressions to her benefit. I always notice her saying "Thank you" and "Faster" in the local tongue, which was a sort of admiration. I feel that the intellectually deficient fraternity brothers did not deserve to stay in the race. However, that is how the race panned out, and of course, life is unfair.

Oh well. The semester is nearing its end. And winter break is around the corner. Time indeed is moving fast. 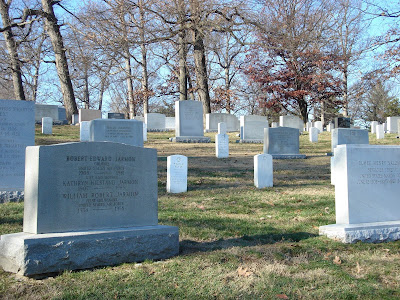 (Jarmon, from my Arlington Cemetery Series)