This is the entry for my second day of sight-seeing in the Big Apple. For the day after Christmas, my sister and I decided to go visit two locations: the Intrepid Sea-Air-Space Museum, and the American Museum of Natural History.

I wanted to visit the Intrepid Museum for two things: it has some cool aircraft, especially the Concorde, which the visitors can visit; and it was also recently renovated and the displays were revamped. In fact, back in November, I heard on the radio that President Bush was actually on the re-opening ceremony and the whole place was bustling with action.

So, with that in mind, I decided to visit that. So with my sister in tow, we walked the distance from Port Authority of New York (where our bus dropped us off) to W 46st St and 12th Avenue. There it was, the huge aircraft carrier. There were plenty of people, but it was still manageable.

One of the good things in visiting a ship museum is that one can explore the inside cabins of the ship. So I saw the sailor's quarters, the forecastle, the hangar decks, the flight deck, and the different holes and tubes that people can go inside. There was also a theater inside the ship that showed a movie about the history of the ship. I didn't realize that the ship was that old.

Anyway, after that, my sister and I strolled to this Hispanic eatery, and we had soft tacos for lunch. My sister definitely has become a New Yorker now, she knows the cheap eats of the city.

Then, we proceeded to the American Museum of Natural History. This was the rather chaotic museum of the day. There were so many children, and we arrived at around 2:30 in the afternoon, and still we haven't finished seeing all the exhibits by closing time of 5:45 PM. There were just so many things to see. And there were so many children, that I didn't like my photographs here because of the excess amounts of unneeded people in the frame. It just is so hard to get a good shot.

I know, that was selfish of me, but maybe that is the reason why I visit rather secluded areas. Climbing Machu Picchu was one example. I liked the place, but taking pictures there was more difficult than Ollantaytambo, for example. But if I compare Machu Picchu with the Natural History Museum, Machu Picchu was a piece of cake. I could simply wait a few minutes and there would be a lapse in which there are no people and I can take my perfect shot. But in the museum, every frame is just full of people.

Now, in retrospect, I ask myself, why did I visit that museum? After all, I am not so interested in seeing dinosaur bones and stuffed animals. Oh, yes. It was my sister's idea. Not that I am blaming her, but in life, one sometimes needs to think for two. If I were by myself, I would not go to a natural history museum, for the same reason that I am not too inclined in taking a tour of the African safari. Animals just don't get me off. I am not too interested in reading about the Pleistocene and the Jurassic era. Instead, I would gladly replace it with fine art, modern art, architecture, or some old house. 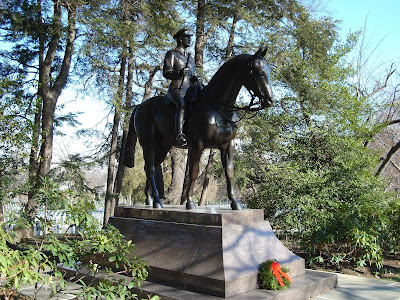 (Theodore, from my Arlington Cemetery Series)