This is my first post for the year. With this in mind, I would like to take this moment to review what happened back in 2008 in my person, and around the world.

2008 saw me living in Buffalo for three straight years. I suppose I got used to the weather here, especially the tough winter. I was shoveling my driveway the other day due to a snowstorm, and I remembered the look of the New Yorkers down in New York City, who looked like they are in a snowstorm, when all they had was rather mild winter weather for Buffalo standards. Although I wish whenever I settle down somewhere, it would not be a city with this kind of weather.

2008 saw me visit 6 new countries. In May, I traveled to Peru and Colombia, and in July, I headed to Denmark, Hungary, and Slovakia. And finally, in autumn, I got my visa for Canada, and so I was able to take daytrips to Toronto and its environs during the weekends. This has brought the total number of countries that I have visited to 18.

2008 was the year in which I started to be active again in conference presentations. I attended and presented my first conference talk back in 2005, and I didn't do anything until 2008, due to the fact that I was busy with coursework and not about my own research. But in March 2008, I presented a poster in a psycholinguistics conference held in North Carolina, which was co-authored by my adviser. I plan to make it a goal to present in at least one conference a year, and so far, 2009 is looking good, since my abstract for a talk was accepted for presentation. That means I have to give a talk this February in California. But more details about that later.

2008 was also the year in which I saw first-hand what the human brain looked like. And because of this, a major switch was turned in my head. I have lost some friends due to this, but as regards the friends who supported me during this ordeal, they have become closer than ever.

So, that was about me. What about the rest of the world?

2008 was the year in which the price of gas fluctuated from 4.25 USD to 1.85 USD, at least here in New York State. Venezuela and Ecuador moved their troops to the Colombian border, due to the Andean diplomatic crisis. Kosovo declared unilateral independence, and so far, 53 other sovereign states recognize it. 69,000 people were killed in an earthquake in Sichuan, China. Robert Mugabe is still the President of Zimbabwe. Nepal ceases to have a monarch. The South Ossetia War was fought between Georgia and Russia. Michael Phelps wins a gazillion medals in the 2008 Olympics. Multiple countries initiate methods on countering the global financial crisis. The first African-American US President is elected. Frozen water is found on Mars. Feudalism is finally abolished in Europe, with Sark holding elections.

2008 also saw the deaths of Bobby Fischer, who was constantly chased by the United States authorities for playing a match against Boris Spassky; Heath Ledger, from a drug overdose; Albert Hofmann, the Swiss chemist who is credited for discovering LSD; Yves Saint Laurent, the French fashion designer; Aleksandr Solzhenitsyn, author of One Day in the Life of Ivan Denisovich; Jacques Piccard, known for exploring the deepest parts of the world's oceans; and many others worth mentioning but aren't for space restrictions. 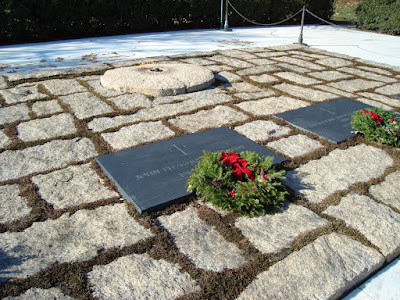 (The Kennedy Graves, from my Arlington Cemetery Series)