Well, this is one of those posts in which it serves no purpose whatsoever but to tell you of some information that is not useful at all. There's two, both related to travel.

Recently, German police has foiled an eloping attempt of two German toddlers, ages five and six. According to this report by the BBC, German police noticed a group of three toddlers on the train station, without a parent. Apparently, two of them decided that it was too cold in Germany, and so they decided to pack up and leave, and their destination was Africa, where they would get married. They even had a suitcase packed with bathing suits and sunglasses. They also have an official witness, a seven-year old sibling.

Another totally useless information comes from this blog, where it blogs about things you can do in airports, if your flight is delayed. Apparently, one of the most annoying things a person can have is a delayed flight. I know, it can be annoying, if you have a connecting flight after the delayed one. In fact, that happened to me, I got stranded in Chicago once, due to a delayed flight out of Miami. Due to that, my flight to Buffalo went without me, and my airline had to book me in a hotel. Yes, chaos in an otherwise smooth schedule is annoying. So, if you are stuck in an airport, this blog may be the solution. You can see whether your airport has things you can do as you let the time pass. Heck, I believe I once saw in some news article that there is a karaoke machine in Houston airport.

So there, two bits of trivia for you. 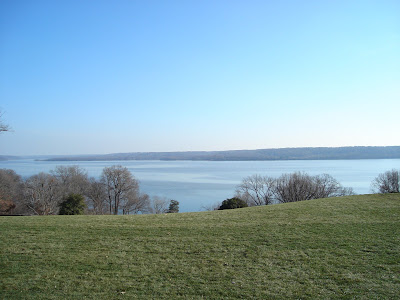 (Overlooking the Potomac River, from my Mount Vernon Series)