So the conference started at February 14, the day where everyone seemed to be in love, or if one is a cynic, the day where singles become totally aware of their singlehood that they decided to label it “Singleness Awareness Day.”

Anyway, we arrived pretty early into the location, and we were able to find the registration location even though Dwinelle Hall was a maze, and according to legend, was constructed by twin architects who had a grudge against each other. We registered, had good coffee, and listened to many different talks about linguistics, ranging from negation to sign language. This was also the day in which I gave my talk, and it actually went well. My session was well-attended, and people gave constructed comments and thought-provoking questions. All in all, I think my talk was a success. If they wanted to throw tomatoes at me, I had my tomato shield with me.

The thing about this conference that I attended was that it is not a conference of a particular school of thought. Basically, talks were open to all schools of thought, including those that I really do not believe in. Back when I was in undergrad, I encountered linguistic theories positing constituent movement, traces, null arguments, and so forth. But then, later I realized that I couldn’t believe in that because there seemed to be no psychological reality to it. If there was no psychological reality to my linguistic theorizing, then what was the point of theorizing? I hate positing complex models if that wasn’t really what is happening in people’s heads. After all, why did I decide to delve into cognitive psychology if not to find out about language and psychological reality?

Anyway, like I said, there are talks which make use of these mechanisms. And it baffles me sometimes that there are indeed people who believe in these things, and take these to be the truth. They posit movement of syntactic arguments from different parts of the clause, and they take it that it really happens in one’s head, deriving one structure from another.

Back a few decades ago, psychologists decided to test Chomsky’s “Derivational Theory of Complexity”. What this theory says is that sentences vary in their complexity. One sentence can be the source of another sentence, so a declarative sentence such as John swept the room. can be the source of the interrogative Did John sweep the room? Linguists say that the verb do makes the second sentence more complex than the first, therefore the second sentence is derived from the first sentence. The hypothesis is that the more complex a sentence is, the harder it is to process. Psychologists tested this, and guess what? It was not the case. They did not find any significant difference in processing load with respect to the sentences. Now Chomsky had a good opt-out. He said that there is a difference between linguistic competence and linguistic performance. Basically, he says that one’s knowledge of one’s language does not necessarily reflect one’s use of language. What psychologists observed therefore was simply the usage of language, and not the people’s knowledge of their language per se.

Now wonder I decided to abandon that school of thought. I realized that while finishing my undergrad degree.

And now I see people pursuing advanced degrees and they believe in these theories, without psychological reality. They create hypotheses and caveats to their theories just so they can explain the data, but they never wonder whether the processes that they posit really happen in people’s heads.

At least, the take-home message I take in this experience is that it is better that one knows one’s enemies. By listening to some of the talks like these, I know what other people are doing, and I know how to make the arguments that would be counter to these.

But then again, sometimes, I cannot help but be baffled when people posit these weird constructs like traces and movement. Maybe I have a movement allergy, I just react wildly when I see these in paper. 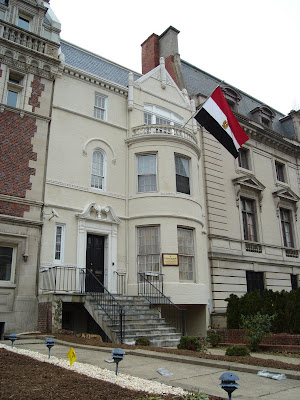 (Embassy of Egypt, from my Embassy Row Series)