There seems to be a bug that is going around the department nowadays. And many people seem to have been catching it. It is the marriage bug.

Well, the thing is, ever since Winter Break, people around me seem to have been getting engaged, and soon to be married. First, there was one, then another followed, and then we learn that a guy proposed to his girlfriend, and then the latest one is when we were in San Francisco, when we learned that one other guy proposed to his girlfriend as well.

So whenever we hear an engagement announcement, of course, it is an occasion to be happy, but the next question would be who is going to be next?

So yeah, that seems to be the newest fad in town.

Which makes me wonder, what is the feeling like? What is it like to be overwhelmed by some indescribable feeling that you want to be with someone else, until the rest of your life? The funny thing is, Blaise Pascal, who is a mathematician, even left a quote, which says, Le cœur a ses raisons que la raison ne connaît pas. The heart has its reasons, of which reason knows nothing. I tend to think of this feeling called love in terms of supply-and-demand and constraint satisfaction. We all have different needs, and these different needs are weighed differently. Some have heavier weights than others. It is simply a matter of which weight is heavier which will then drive us to pursue actions that would satisfy those needs.

So theoretically, one can model this set of constraints, and weigh them accordingly. Now, the point of being engaged is when the set of weights that correspond to one's need to spend one's life with someone else tips over. There should be a threshold, a certain measurable point, in which if the set of weights are adjusted so that the overall sum of constraints end up requiring one's system to propose, then an engagement occurs. Otherwise, then it will not. I could imagine perhaps using a probabilistic model where one can solve for P(B|A) where B stands for engagement and A stands for the set of one's current constraints. Depending on the overall sum of A, the probability of B occurring may be high or low.

I suppose this is a very interesting mathematical problem. 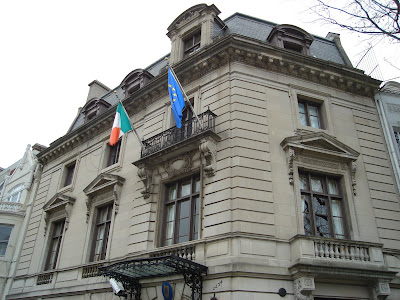 (Embassy of Ireland, from my Embassy Row Series)