Do I Have Asperger Syndrome?

Sometimes, finding the greatest common divisor is a pain in the neck. There are multiple phenomena that happen around us every day, and one hopes to find a logic behind those phenomena.

I have noticed that I do things in a way that would make it seem that I have something that is known as Asperger syndrome. Not that I went to a psychiatrist and had myself assessed in the DSM-IV, but looking at the pattern of symptoms seem to suggest that I check off some of them, if not severely, at least mildly.

Now why am I positing this? Am I a hypochondriac? Maybe not, at least, as far as I know, I do not constantly do a self-diagnosis or self-examination, I do not go to physicians all the time worrying that I have a serious illness. I suppose all I want to do is to fit the best fitting curve to the pattern of data that I have and see if that explains the phenomenon. If the R-squared (effect size) of this regression curve is large, then sure, if not, then I will drop it.

Now what is Asperger syndrome all about? According to the Online Asperger Syndrome Information and Support, (i)ndividuals with AS can exhibit a variety of characteristics and the disorder can range from mild to severe. Persons with AS show marked deficiencies in social skills, have difficulties with transitions or changes and prefer sameness. They often have obsessive routines and may be preoccupied with a particular subject of interest. They have a great deal of difficulty reading nonverbal cues (body language) and very often the individual with AS has difficulty determining proper body space. Often overly sensitive to sounds, tastes, smells, and sights, the person with AS may prefer soft clothing, certain foods, and be bothered by sounds or lights no one else seems to hear or see. It's important to remember that the person with AS perceives the world very differently. Therefore, many behaviors that seem odd or unusual are due to those neurological differences and not the result of intentional rudeness or bad behavior, and most certainly not the result of "improper parenting".

Social skills: ah, I exhibit this trait. In fact, I lack social skills to the point that people call me an alien being and not human. Sometimes, I alienate other people and act weird and otherworldly. I tend to push other people's buttons without even knowing that I do so, and fail to detect that I am annoying other people due to the fact that I am bad at reading body language. I don't consider myself an extrovert, and sometimes, the few people I let inside are hurt as well. In fact, one person who I used to talk to actually requested that I not talk to her anymore a couple of weeks ago.

Difficulties with transitions of change: I suppose I have difficulty with this, but have learned to cope, after all, I was brought up in an environment where moving from place to place was essential. After some learning and feedback, I suppose I learned to apply the maxim that I shouldn't plant my roots too deep in a place, since I'll have to uproot them again in a few years or so. And even now, I have voiced pipe dreams here in this blog that I believe I am staying a little too long in Buffalo for comfort.

Preoccupation with a particular subject of interest: I know quite a lot about travel and airlines. I know the three-letter IATA airport codes that when I see a license plate number with three letters, the first thing that comes to mind is what airport it represents. I know the airline routes around the world and can plan a trip to obscure locations like Timbuktu (the closest airport by the way to Timbuktu is Bamako Senou Airport in Mali, with the code BKO). When I was little, I collected the time tables of the different train companies that were relevant to where we lived, and I had timetables of almost every station of those companies. Now is that a preoccupation or not?

Sensitivity to sounds/smells/sights: Hmm, not really.

I once did an IQ test once, and it came out to be 141. The average IQ of the human population is said to be 100, with a standard deviation of 15. That means I am 3 standard deviations away from the average. Unlike autistics, Asperger syndrome patients can have normal IQ and normal language use. However, what is different is that Asperger patients may have deficits in language use such as prosody and pragmatics. Now that I tick off. People around me can simply attest to how I mutate language and use it weirdly. In fact, this is one of the reasons why some people think I am eccentric. They say that Asperger patients can be extremely literal, and guess what? I cannot get sarcasm.

I just want an explanation. 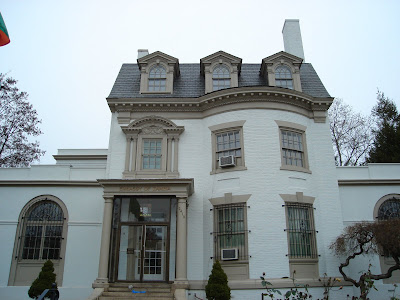 (Embassy of Zambia, from my Embassy Row Series)