The Failed Mission Concerning a Pie

So I was tagged by Priyank to have something to do with a pie when Pi Day comes around. Granted, I was on the road when March 14 came and went, so I took a rain check. I figured, hey, if I were to make a pie, I'd make it different.

Well, let me tell you what I meant to make. I wanted to make a pie that is not dessert-related. In other words, this pie should not be sweet. It should not be eaten as a dessert. So I searched for recipes for pies that have meat in them.

Now, we all know that I seldom use my oven, right? There is a reason for this, and the following story is one.

So I decided to make a pie that has Italian sausage, salami, mozzarella and Parmesan cheeses in it, which is actually somehow a quiche or a tart. It also calls for 4 eggs, milk, and nutmeg. This picture shows all the ingredients. 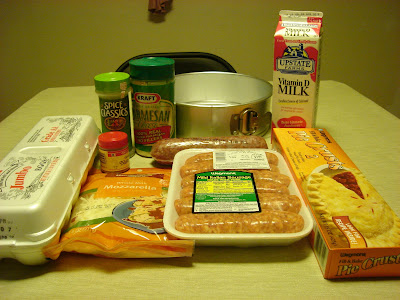 I then prepared the pie crust, baking it for 15 minutes in the pan. In the meantime, I prepared the filling by sauteing the Italian sausage, and mixing it with the salami and the cheeses. This is a picture. 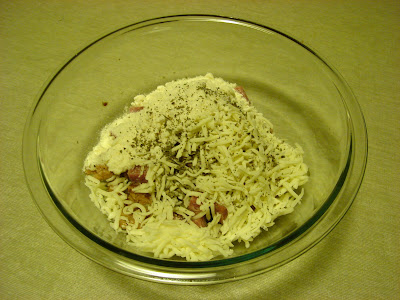 Here, you can see in the bowl the meat, the cheeses, and the basil. This then went on top of the crust, once the crust was done, as you can see on the next picture. 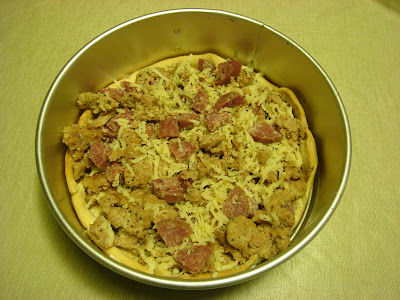 The final step is to beat the four eggs, together with the milk and nutmeg, and pour it on top of the filling. Then, one has to bake it for 30 minutes until the egg-milk mixture has settled. 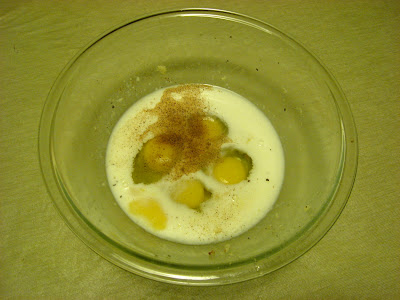 The picture above shows the eggs and milk before beating it. What follows is the disaster.

Due to the fact that spring pans have removable bottoms, it leaked when I poured the mixture into the pan. My eggs, they were leaking!

As an interim solution, I placed the spring pan into the oven with a flat baking sheet underneath, which caused the leak to be burnt a little bit. This resulted in the pie being a little thin, due to the escaped tart material. So much about making a pie that's different. I don't even want to show a photo of my pathetic meat pie. In fact, it looked so pathetic that I didn't even take a photo of it.

As a consolation, however, it was still edible and quite tasty. But I don't think I will be using my oven again in the near future.

I want a real pie. I guess I will head to a bakery and buy one. 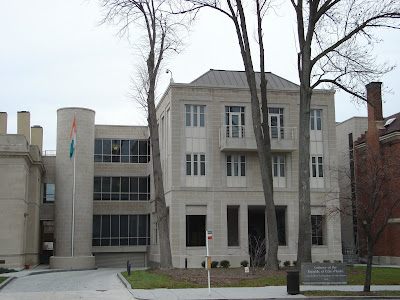