I would take this blog post as a brief break from my Embassy Row Series, due to the fact that I am tagged by Priyank. Apparently, the directions involve posting a photo revolving around the number six. Here's the directions.

So, let's see how this turns out.

Now this is the hard part. I don't know which photo album collection. My hard drive? My Facebook photo album? Oh, I have an idea. Based on my website, I can select the appropriate photo. It is arranged by country, and the sixth country happened to be Ecuador. Within Ecuador, the sixth photo album is La Basilica del Voto Nacional. And within that album, this is the sixth picture. 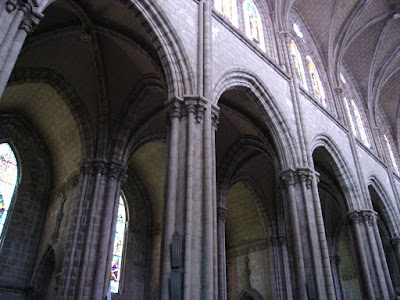 In May of 2007, I decided to do a practice vacation. This happened to be the first time I went somewhere for a vacation on my own. My father told me not to go to South America due to the fact that I might be kidnapped. I wanted to go to Machu Picchu, but that destination was rather complicated. So I figured I should practice on an easier destination, so I picked Ecuador instead. I thought, if I get out of Ecuador alive, then I could do Peru later. Which indeed, it happened. I went to Peru to climb Machu Picchu a year later.

But anyway, this photo was taken inside the Basilica del Voto Nacional. This is a rather new church, new relatively, compared to the other churches that were already there centuries earlier. The picture here depicts the massive concrete vaults that dominate the whole structure.

This church is also the site where I got trapped into an elevator for 3 hours. I wanted to ascend to the bell tower, and there was a staircase and an elevator. I happened to be alone, and nobody else was joining me to go to the top. I pressed the elevator button, the elevator came and opened, I pressed the button for the top floor, and it closed. It didn't move. The lights turned off. I was trapped. I knocked. Mechanics came in. They were trying to repair and open the elevator. In the meantime, I was in there, sitting down in the dark, knocking from time to time, and they were telling to me please remain calm. Good thing I wasn't claustrophobic. Three hours later, they were able to open it, and I got out, and climbed the structure instead by the stairs.

Step 3: The Part Where You Infect Others

Hmm, this is the hard part. I'll probably pass this opportunity. The thing is, I don't think I can think of six other people to tag. I suppose it shows my small cyber-circle. But, if you guys want to do this, let me know so I can see what you got.