Spending a Day in the Underworld

I suppose some people may be wondering where in the planet is Linguist-in-Waiting? I mentioned casually a couple of posts behind that I will be out of town during Spring Break. So yes, right now, I am not in Buffalo. I am in and around Appalachia.

A good friend of mine and I are currently taking a road trip, and right now, we are in Charleston, West Virginia. This happens to be the second of four locales we are visiting. I am right now on top of a bed in a little hotel, accessing the wireless Internet connection. I just crossed a state boundary earlier today, and almost encountered a tornado while on the highway.

So let me clarify. Yesterday, we just drove for ten hours, from Buffalo, NY to Cave City, KY. Yup, that's Kentucky, home of the horses. However, we didn't cross three state borders to see the horses. Instead, we went to Kentucky to see the longest cave system in the world, none other than Mammoth Caves National Park. So what we did was just drive all day yesterday, and after that, we plopped in a hotel and slept.

The next day (today), we went to the national park and took a guided tour. We booked the Grand Avenue Tour, which is the longest guided tour that doesn't require crawling or rappelling down crevices and holes. It lasted for four and a half hours. It was strenuous, it was slippery, but it was fun. It was also a good workout for my goal of mountain-climbing in Borneo. I got sweaty, but I didn't lose my breath. I saw plenty of rocks, I saw gypsum flowers, I saw stalactites and stalagmites, and I also experienced darkness. There were a few times in which the park rangers would turn the lights off, and there was practically no light, just a dark and gloomy place.

Interestingly enough, I hadn't made much use of my camera inside. I did take a few photos, but in relation to other places that I took photos of, I wasn't taking copious pictures in the four and a half hours I was underneath the earth. Perhaps it was because I was busy holding to the handrails and making sure I wasn't slipping. 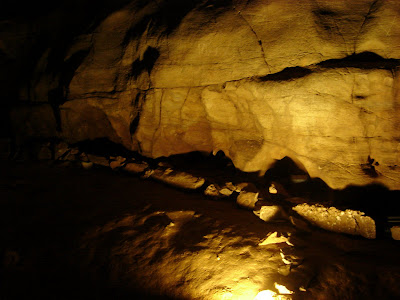 The above photo is the usual scene inside. Mammoth Cave is mostly a rock cave. There aren't a lot of dripping water inside. There are plenty of slot canyons, where one has to practically go single file inside. 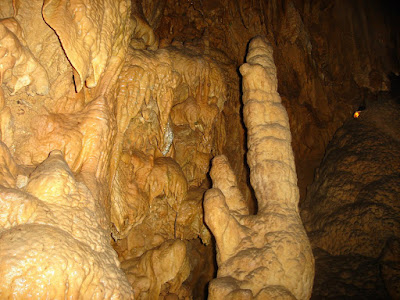 This is a prettier picture perhaps. This is near the Frozen Niagara Room, which is filled with stuff that look like these. This reminds me of when I went to central Czech Republic and saw Konepruske Jeskyne (Koneprusy Caves), which was the largest cave system in Central Europe.

So that was today. We are spending the night here in West Virginia, and the plan is to see this city tomorrow morning, and be on the road again so by tomorrow night, we'll be in a different state.