So how do people process causation? How do people determine that a certain event is a cause of another event?

The relation of causation is one such thing that I am studying, and I am especially interested in the inferences that people make whenever they encounter a certain discourse where there are multiple possible causes. How do people process events in the world, and how does the language modulate this process?

Some other people already studied how different events are related to each other. Some have posited a probabilistic account of causation. This basically means that things that usually co-occur together cause one another. So a stabbing event usually co-occurs with a bleeding event, and so we can somehow construct a probabilistic account of the stabbing event being a cause for the bleeding event. However, this is not always true. Thunder co-occurs with power outages quite often, however, thunder isn't a cause of power outages.

These accounts are the two most popular accounts within the dependency models of causation. There are other models of causation, resorting to physicalist models, where they reduce causation into transfers of energy, force, or some other related factor. Whether these are the better theory for causation is still up for debate. 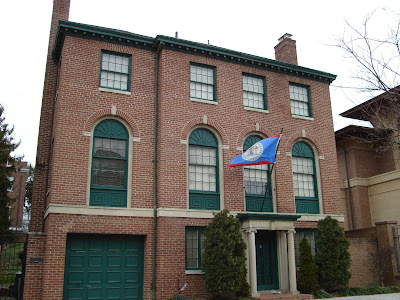 (Embassy of Belize, from my Embassy Row Series)