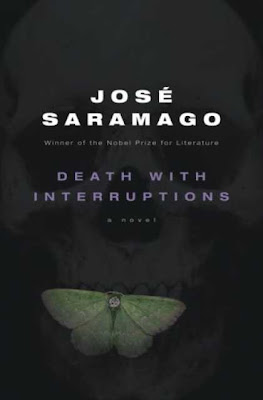 Wow. That's what I can say upon finishing this book. This is a book about death, both as a phenomenon, and as a personification.

I have read one of his other novels, entitled The Cave about more than a year ago, and I liked it. Saramago writes in a very interesting style, where his prose was rather in the stream-of-consciousness style, and the dialogue is interspersed with the prose. Paragraphs usually take more than one page long, and non-human entities like dogs even get a chance to think.

So yes, in this book, those qualities still hold true. A dog and a scythe both had the ability to think in this novel. But before I explain that, let me recount the synopsis first.

The book is roughly divided into three parts: the first part tells the story of when death decides to rest, at the strike of midnight, in New Year's Day, in a certain country. So, for the next seven months, nobody dies in this unnamed country. Of course, this had its own interesting ramifications: the funeral parlors went bankrupt, to the point that the government order everyone in the country to subject their pets to the same funeral treatment that they used to give to humans, just so that the funeral parlors and the gravediggers have jobs. The church also had problems, because they think that their doctrine is now nullified, since without death, there would be no resurrection, and without resurrection, there would be no church. Apparently, one could still die if one gets out of the country's border, so people who wanted to die like the extreme aged people cross the border, and the minute they do so, they expire. Eventually, the three bordering countries were on the brink of declaring a war due to the border violations, which led to the development of the maphia, an underground organization that people can pay big money so that their very aged grandparents can be transported to the border and let die.

The second part was when death decides to stop her social experiment. Apparently, she wanted to see what it would be like to give the people what they really want. She argued that people always wanted to live forever, that people had high hopes of living forever, joining religions preaching eternal life, and that people always wanted to deny the fact that human life will someday expire. So she gave them a taste of what that would be, which, as we have seen in the first part, rather comical but disastrous. So she sent a letter to the media, saying that the social experiment is over, and at the strike of midnight, all of the people who were scheduled to die within the past seven months would expire. Thus, at the strike of midnight, 62,580 people died. Death also explained that she would be kind this time, that she would give one week's notice to everyone who was scheduled to die. Thus, if one wanted to make good with their long-lost cousins, or mend an argument, they have one week to do so, so that they can write their will, and die peacefully. Death argued that letting a person die without prior notice was rather cruel and harsh. She warned the people of their deaths by sending them a note written on violet paper. Of course, the government started investigating whether there was a certain prankster who was writing all these notes, but to no avail.

Finally, the third part consists of death and her infatuation with a rather invincible cellist. The city's orchestra's principal cellist was scheduled to die, but somehow, the letter that death sends him always comes back unsent, returned to the sender. Death tries so many times to send it again and again, and every time, it gets returned. Death becomes infatuated with this cellist, to the point that she takes on the form of a human, and interacts with the cellist, in the end falling in love with him. In the end, they spend the night together, and the novel ends with a sentence stating that the next day, nobody died.

This book has been one of the greatest books I have read recently. It takes the topic of death, and using a what-if scenario, tries to describe what would happen to the human race if death is not around. Death owns a scythe, of which she carries a conversation with, even saying that they had happy times together in the past, when that was the preferred method of killing, but now, the preferred method would be those middle-class diseases, such as heart attacks and strokes. The cellist also has a dog, which also gives his thoughts to the reader. At times, the book is comical. One such incident is when death wonders the efficiency of her method of sending a letter. She notes the existence of faster and more reliable methods such as email, since everyone has email nowadays, but she still prefers the traditional method of snail mail.

In the end, I appreciate this book since it gives an allegorical take on one of humankind's obsessions, that is, avoiding death. Death is always going to here, and is something that cannot be avoided. Many people want to shake off death altogether, but humans were never too good in accepting it as a fact of one's existence. Perhaps, that is the better hypothesis to take, that death is just another facet of human existence, and taking it out of the equation makes things rather disastrous an more complicated. 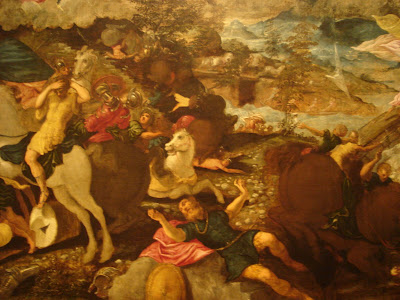 (Flying Horses, from my National Gallery of Art Series)