If there were a button or a magic wand that I can use to make things disappear or make things speed up, I would possibly do that. But then, that is not reality, the reality is that those things do not exist.

This time of the year is rather stressful. There are plenty of things that have to be considered, and I suppose the trick is considering them in a fashionable and orderly manner.

I suppose the first thing to be considered is my finances for next year. I need another year to do research for the dissertation. I am done with my coursework, so that is already taken care of, and I am graduating this June with a master's degree, earned on the way of earning a doctorate. Thus, the upcoming year will be focused to the dissertation research and it alone. With regard to that, I need to secure funding for one academic year. I have already applied to some funding sources within the university, in case the department does not give me funding. The department has been sort of hinting that I would get at least a semester's worth of funding, but I hope that they give me more than that. Looking at the track record of people who came before me, maybe that is a possibility, but I am not putting all of my hopes in there, so I am covering my ass as much as possible by applying to other sources.

Another thing to consider is the dissertation proposal. I am supposed to give a first draft by the first week of May, since it will count as satisfying a course requirement for a class I am taking. Hopefully, I can find time to research what I am doing for it and draft it on paper. As a preview, my dissertation will involve the psycholinguistic aspects of inference generation regarding causality. Let's leave it at that for the moment.

Those perhaps are the two big things that are mulling inside my head at the moment. There are other things as well, for example, the fact that there are people scheduled to meet with me every day, in order to do the experiment that I have designed but is done not for my research but for the professor who I am a research assistant to. I schedule about twenty people per week, since after all, I am paid to do twenty hours of research per week. I could schedule more, but then that would amount to neglecting my own research, and I have my own deadlines to keep.

I also need to find a new roommate. My current roommate is moving out at the end of May, so I need a new roommate at the beginning of June. My current roommate thinks that the rent is expensive for him, so I don't blame him for that. I guess it is a good thing, however, since he isn't the best roommate I had. Come to think of it, of the three roommates that I have had, the best one so far was the first one, when I was still living on-campus, but I remember that I complained about him too much as well when I was still living with him. I guess I just have high standards and people do not measure up to it that much. I tried to mention the things that I do not like to my roommates, such as leaving the toilet unflushed, leaving crumbs on the sink, among other things, but then, I am not their parent, and after a few times mentioning these, they should have known that these are not so good habits to keep. They're also adults, so I suppose it is simply true that you cannot teach an old dog new tricks.

I also need to deal with my visa situation pretty soon. My current student visa will expire in June. I am still a student, so that doesn't mean that I will be staying here illegally once June passes. However, that means that if I need to get out of the country, I have to get a valid visa in order to get back in again, thus, if I have an expired visa, then I would be trapped here. I don't like that situation, so I need to somehow go back to Manila sometime and renew it. I will do that once I know of my financial situation for next year. If I only get one semester, I might as well wait it out and stay here until the end of that semester, then go back to Manila and see what I can do from there. If on the other hand I get a full year of funding for next year, then I will definitely try to find a way to go back to Manila and renew my visa during this summer so I can get in and out of the country legally and without being hampered. But as of now, I still do not know what will happen next year so that is still unanswered.

I hate this situation in which things are left unanswered. Things are hanging, and so they can be frustrating sometimes. I also hate the fact that I have to live on a year-by-year basis. But then, what can I do, this is just a means to an end. I am starting to hate school, and I am slowly accumulating the itch to graduate. Hopefully, that is sooner than later. 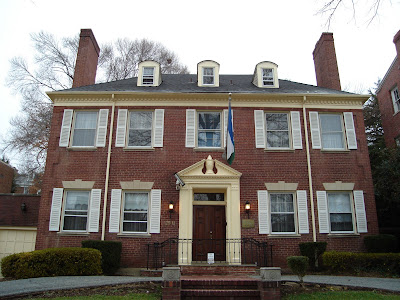 (Embassy of Lesotho, from my Embassy Row Series)