This last weekend, I went to two concerts that are offered free by the university's Department of Music. And I should say that those concerts were very eye-opening.

The concert that I attended last Friday evening was the UB Contemporary Ensemble. It featured chamber works by composers that are not only actually still living, but are in fact attending the concert in the concert hall. The first half of the concert featured works by students in the composition program, and they were rather interesting. One piece featured toy instruments, one piece featured shredding paper and a knife being sharpened. It was quite interesting indeed.

The second half of the concert featured selections from Benjamin Britten's chamber opera The Turn of the Screw. My friend who plays the harp was part of this piece. It also featured four singers: three sopranos and one tenor. It was an opera with a bizarre theme, featuring ghosts and governesses, but the music was grand.

The second concert that we attended was last Saturday, and this was, like the first one, free as well. This was the concert of the UB Percussion Ensemble. It featured four long pieces, and all of them were contemporary compositions as well. The first one was a piece by John Cage, which featured a radio. The second one was a modern percussion piece that featured a soprano singing a Japanese poem. The third one was a piece composed by a composition major, and the piece involves the musicians setting up the instruments. However, the best piece of the night was the fourth one, which was a composition written for the soprano of that piece, which was a music student here in the university. The composer was from a different state, but he was in the attendance. The soprano was very versatile, and the piece was quite difficult I suppose. But it was a piece that made me sit on the edge of my seat for the whole time it was being performed.

I like the music department here. I suppose their strengths lie in composition and theory, so I am fortunate to be able to attend these premieres of modern music. It totally is a different experience. 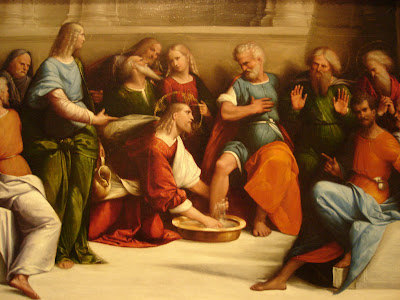 (Washing Feet, from my National Gallery of Art Series)