This past weekend was rather busy, given the fact that it is the final weekend of the semester. Let me start Friday.

Last Friday was the last day in which I had a class. I attended the seminar and then it was over. Of course, I still have the paper requirement for that class unfinished, and so I will be working on that after I write this entry. However, there were several social events that day, such as a Colloquium Awareness Bash in the afternoon, where the department had a modest finger food event, very Mediterranean, and fun as well. A few students also organized a pink shirt day, so I wore a pink shirt, and we attracted quite a little attention from other people who noticed it.

Then, of course, the graduate students also held a end-of-semester pizza party, so that we can spend the rest of our club budget on something that everyone can participate in. That also marked the end of my duties as an officer in the graduate student club. I suppose I won't be planning to do this again next year, given the fact that I may or may not be here for the whole year.

Saturday was a day in which I just went to my office and worked my ass off for the whole day. I had to start my final exam for my Psycholinguistics class. The task was to describe the design characteristics of the human language processing system, citing evidence from word recognition, sentence processing, and language production. I basically constructed a design that has five components, and the whole system is interactive and connectionist, instead of being a modular system. I suppose I am convinced that the architecture of the human language processing system should be this way. If you guys want the paper, then let me know.

On that evening, I went to the Music Department to attend a piano recital. I suppose the musical festivities of the Music Department provide the appropriate break moments of my work, and the music was good indeed. The performer was a graduate student of music performance, and he performed a concert that had Bach, Beethoven, Cage, and Chopin in the program. I suppose I liked the concert, except for the Beethoven piece. He played the Tempest Sonata, and I felt like I wanted more forte and piano contrasts in the piece. However, his rendition of the Bach Chromatic Fantasy and Fugue was amazing. It was overall an amazing performance.

Sunday was similar to Saturday, in which I was still working on my psycholinguistics essay. It had to be within 12 pages, and I was two-thirds done. In the evening, my friend and I went out to eat, and then we watched a movie on DVD. The movie that we watched was The White Countess. We didn't like it too much, because there seemed to be no plot. Anyway, that was that.

Monday was a very busy day. I actually accomplished plenty of things yesterday. First, I met with a fellow student, and we discussed an experiment that we are planning to do. This is actually an experiment that involves replicating some other people's result, because we think that there is a confounding factor in their experiment, and so we want to tease it apart. If this actually goes through, then we can present the results in a conference next year. If that happens, then my track record of presenting in at least one conference a year would be good. I will be designing stimuli and then meet with him next week again.

Next up, I also was emailing a professor back and forth regarding some statistical consultation. He had a bunch of data, and he needed to do some stats tests on it, so he was consulting me along with other people. It was fun, and then it was resolved.

What else is there? Oh, I also went to the International Students Office, and extended my stay. That means I will be legal again for the next year, at least. I also filled some forms for my bank certifying that I am not a citizen, because it seems that they need it for some tax purposes.

I also finished my psycholinguistics essay and turned it in. It turned out to be 12 pages long, plus references. Right within the page limit. And since I was so busy yesterday that at around 4 PM, it seemed that my blood circulation had cayenne pepper in it, that I was so jittery and perhaps, too much adrenaline flowing in my system, my friend and I decided to take a walk in a nearby state park, where we strolled along the beach of the river.

Finally, we got back to campus again, and attended the last performance of the university's symphony orchestra. It also is the last performance of the conductor, because he is moving out of town to the West Coast. I will miss him, I actually like the way he developed the symphony orchestra, and they showed a great improvement than how they were before the conductor came in.

So yeah, that was last weekend. I still have some things to do before this semester finally ends, such as finish the first draft of my dissertation proposal, and finish writing another paper for publication. So there. I need to get back to work. 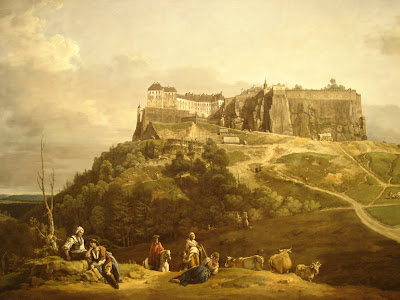 (Mountain Scene, from my National Gallery of Art Series)