It is almost the end of the semester. April is pretty much just a week left, and soon enough, I will have to turn my calendar to a new page.

I suppose this is a season in which beginnings and ends happen. I was walking on campus this afternoon, and I saw the gardeners planting grass seeds, since the lawns were pretty much destroyed during the winter season. In a few weeks, the lawn would be sparkling green again.

The conductor of the UB Symphony Orchestra is leaving for the West Coast. Too bad, because I liked the style and the contributions that he brought to the Music Department. I was very much impressed at the improvement of the group when he was here for two years. This coming fall, he will be moving to California to fill a position in another symphony orchestra. I wonder who will be here to conduct the university's orchestra next year.

Speaking of next year, I myself do not know if I will be here next year. The department has said that they would be notifying people of the decisions by Monday, so I have about two days to wait, before I know whether I would be here or not next year. Hopefully, the outcome would be good.

Stress is quite high for me nowadays. Perhaps it's because of the uncertainty of the future, and the fact that my personality just wants things to be planned and certain makes it even worse. The Filipinos have an expression along the lines of Bahala na... which translates to Whatever will be, will be... reflecting the usually fatalistic nature of the Filipino folk. I do not believe in fatalism, however, and I tend to believe that I make my own future. If there isn't anything at the moment in my future, I will put something in there so that there is something in my future.

I suppose I never thought of the question of what's next. When I was a little kid growing up, there was always a next step. When you're done with first grade, there is second grade, when you are done with elementary school, there is high school. After high school, there was college, and after college, there was graduate school. I suppose the progression just went through naturally. Even in graduate school, after my first year, there was second year, third year, and fourth year. Now, after this semester, I am done with my coursework, and all that remains is a dissertation. Within the dissertation process, there is the idea. Then, there is the proposal. Then there is the actual research. Then there is the defense. Right now, I am in the proposal stage.

But no. I didn't work hard for at least four years of my life for nothing. I love the lab environment. I love the mental taxation that I get when I think of clever experimental paradigms. I love the feeling that I get whenever I see the data lining up in accordance to my predictions. So perhaps I will do whatever I can do achieve this end-state.

I suppose this rambling is simply the result of the fact that I cannot take it in my own hands what my future is going to be. Would I find myself still here a couple of months from now? Or would I find myself packing my bags and flying halfway around the world again? I don't know that yet, and I am not taking the optimistic mentality. In that way, if I do find myself staying here for another year to finish my degree, I will be happy. If I set my expectations really low, even the slightest inkling towards a desired end-state will be cause for rejoicing. 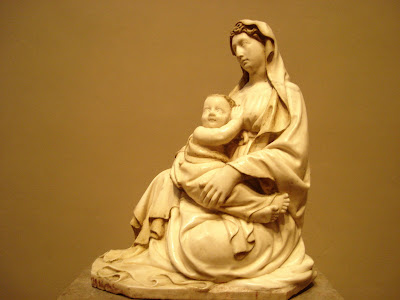 (Marble Madonna, from my National Gallery of Art Series)