This past weekend, a friend of mine and I watched a movie entitled The Butterfly Effect. We happened to pick this as our movie of the week, and it was rather philosophical and metaphysical as well.

The movie centers on the assumption that what if the flap of a butterfly's wings cause a tornado on the other side of the planet, also known as the butterfly effect. This was actually an original idea of Edward Lorenz, an American scientist who pioneered chaos theory.

Hmm, it seems that I have been blogging about this topic for multiple times now. I blogged about the butterfly effect and the Gaussian distribution here, here, and here.

I actually like this movie. It centers around a college student who experienced blackouts when he was a kid, and suddenly realizes that one can time travel back in time by reading his journals. He also realizes that he can change certain things in the past, and that in turn results in certain changes, with new memories being added.

In the end, the morale of the movie is that one really cannot change the factors that affected one's childhood. No matter what one does to ratify one's past, there are consequences that cannot be avoided.

It is a very interesting Gedanke experiment, however. 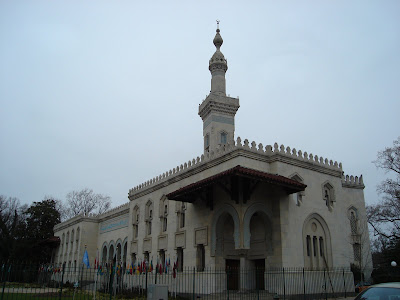 (The Islamic Center, from my Embassy Row Series)