Why Armchair Linguistics is Not For Me

Here's a funny article from Speculative Grammarian, a satirical take on the academic field of linguistics. Original site is found here. I suppose this illustrates my preference over experimental methods of inquiry instead of simply sitting down and theorizing on linguistic phenomena.

While sitting in the Linguistics Lounge the other day, I overheard some first-year grad students discussing the day’s Spanish class. My eavesdropping turned out to be much more interesting than I had anticipated.

I must interject here that several faculty members and grad students had fought against the idea of first-years fulfilling their foreign language reading requirement with Spanish. Objections ranged from the dearth of academic linguistics material published in Spanish to the commonly accepted ease of learning the language. Frankly, I believe it came down to snobbery on the part of those who ‘read’ French and German, and I over-ruled them all. Such are the perquisites of Chairmanship.

So it was with much interest that I listened in to the conversation. The first set of data under consideration is presented here:

Given the known meanings of luego (‘later’), pronto (‘soon’), jueves (‘Thursday’) and mañana (‘tomorrow’), our intrepid heroes determined that hasta must mean ‘see you’.

Then one of their number added this bit of data:

I thought this would lead them to reconsider their earlier conclusion. Not so. Hypotheses they considered included non-identical reduplication, a grammaticalized verbal tick, and analyzing la vista as “a recursively epenthetic allophone of an inductive null-morpheme” (though I think that last may have come from a particularly sarcastic second-year with a BA in Math who walked through the lounge about then).

In any event, my heart sank.

Eventually, their conversation moved away from hasta et al., and turned to salutations. One of them misspoke and said “habla” for “hola”. They laughed for a moment, but suddenly stopped short. There was a flurry of scribbling and murmuring, and I lost the thread of the conversation.

When their heads came up, I heard one say, “See, hola has the phonetic shape of a verb. It must be a verb.” A pause. “But what does it mean?”

Another had a sudden, devastating inspiration: “Habla means ‘you speak’, so hola must mean ... what? ... ‘you are greeted’?”

A third objected—but not at all as I had hoped—“But that’s the formal ‘you’. Shouldn’t we use the informal with each other? What would that be? Holas?”

The first replied, “Only for one person.. holan for multiple people.”

The second asked, “What would holamos mean? ‘We are greeted’?”

At this point I threw up in my mouth a little bit. But before they could tragically analyze the abomination that is neological holamos, they realized that they were late for their classes. They parted ways, each smiling and saying “¡Hasta!” to the others as they left.

The next morning I entered the Linguistics Lounge by the side door, finding two of the three already drinking coffee and reviewing their Spanish homework together. The third entered, somewhat ashen-faced, and sat down. “¡Holas!” the other two offered. When there was no response, they stared in silence. I stayed to watch and listen.

Finally their comrade spoke. “I talked to my roommate—from Mexico—last night about our analysis of hola and hasta. I think we got it pretty wrong.”

Objections were quick and fierce: “Nonsense!”; “No, it was a good analysis.”

They spoke amongst themselves quietly and finally seemed to arrive at a consensus: the native speaker, while invaluably informative, is linguistically naïve and not to be taken as the final authority on anything.

This struck a nerve with me! Up to this point I must say that I was considering whether it would be appropriate to consider removing these proto-linguists from our prestigious program—and, I admit ashamedly, I was even considering some creative means of drumming them out should standard administrative manœuvres fail.

But this instinctive flouting of the authority of the native speaker broke the dam and rewrote the rules of the game. Linguistics, as either art or science, is very much a skill—a skill that can be trained and honed and sharpened much like any other, so there was always a faint hope for their analytic skills—that is what graduate school is all about, is it not?

But certain aspects of the practice of linguistics as a theoretical science, as a practical academic subject, as a political minefield, are only ever truly mastered by those with certain inborn abilities.

The abhorrent analysis and theoretical violence these all-too-young babes-in-the-woods had done to the mellifluous Spanish language had saddened me, almost angered me. But this final strike at native speaker competency was something different all together, something that could not be denied.

Clearly they are to Linguistics born, and will not bend to the whiny “needs” and “wants” of native speaker naïveté. I have personally taken them under my wing, and will see that they achieve all that they so obviously are meant to in the field of theoretical linguistics. 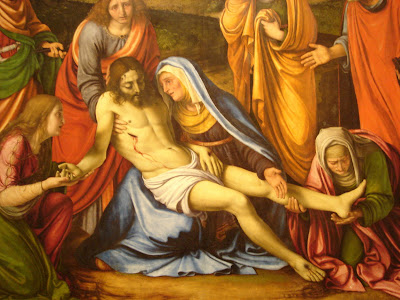 (Pierced Jesus, from my National Gallery of Art Series)