The remaining time for me here in Buffalo is slowly ebbing. At this point, I am projecting to be here until December 2009, and it is still not sure where I will be after that. However, the current uncertainty and fluidity of things made me assess who I am, and where I want to be.

Perhaps I have mentioned this before in this blog, but I am a third-culture kid. I was born in one country, and grew up somewhere else. Because of that, the cultural black box that I have is significantly different from those other people who are from my citizenship country.

I do not want to say that I regret growing up like this, since I would not want to change a single thing with respect to my past, but there are some things that make it mentally difficult. I am multicultural and acultural at the same time. Perhaps, the world just doesn't have a ready-made cultural label for people like me.

As an example, if you identify as a Filipino, there are certain cultural assumptions that other people can make of you, which can be true more times than not. Typical Filipinos place a high value on the family to the point of living together in one location even in multiple generations, they take certain beliefs as truth, they eat certain foods, they see things in a way that other people do not.

If you're an American, you would perhaps be a fan of football, you like pizza and wings, you would be so fascinated with sex during high school and alcohol during college, and your rites-of-passage would be the College Spring Break and a backpacking trip in Europe.

I don't have that. I don't have a brand. Not that I want to have a brand, by no means would I want one, but sometimes, it seems that things are easier if I were typical.

A few weeks ago, I thought about immigrating to Canada. This was due to my student status and visa situation here. I am currently here in the USA as a student, so I have to maintain student status in order to be here in this country legally. And there are so many hoops and hurdles that people have to go in order to say, stay here.

So I figured, what if I immigrate to Canada? I should have a job offer there first. Right now I don't have one, but I looked into Canada's citizenship and immigration services anyway, and it seems that based on my current qualifications, I pass the immigration requirements. I fluently speak English (although I am better at bastardizing French than understanding it), I have an advanced degree, and age-wise, I am good. If I remember correctly, I have more points than needed in the test.

Most people feel an attachment to their birth country. There are even people who would support their birth country regardless if it were right or wrong. I on the other hand think that my citizenship is simply random and the product of an accident, a glitch, a random chaotic blip in the universe. After all, one of my immediate family members carry a different citizenship than mine, and no, that was not the product of naturalization.

The difficult thing with being a third culture kid is that I cannot see myself settling down in one place. If one looks at my apartment, seriously, I only need two days to clear it and move: one day to pack, and another day to clean. I don't have any permanent fixtures. My furniture is minimal, and easy to haul. I feel like a turtle, always ready to go and leave town in the middle of the night if needed.

Emotionally, it is the same thing. I have a few friends, a few close friends. It used to be that I had less friends than now, but that was a different issue. Commitment is a big issue for me, since it always will be the case that I will look after my back, after all, I believe in two big tenets that drive humanity: mankind is inherent selfish, and mankind is inherently curious. Yes, I am selfish, I don't deny that. I find it hard to sacrifice, unless it is a person I really care about. Perhaps it is because we've moved around quite a lot, that nobody really was there to be relied upon. My family isn't close to other members of our extended family: I don't really know my cousins. So survival always meant protecting oneself, being selfish in that way. In short, it seemed that it was best not to plant my emotional roots deep in a certain place, after all, I'll find myself moving again in a few years. It's less pain that way.

I suppose, due to that, I feel like I can simultaneously belong everywhere and nowhere. I wonder what it would feel like living for a few years in Bogota or Helsinki, just to pick two locations as an example. I think that only a few people actually know who I really am, since I myself do not know who I really am.

Perhaps this is what drives me to spend time by myself in a foreign location. I suppose finding myself alone, with nobody I know around me, surrounded by people I haven't seen before, speaking a language I don't understand, is just a self-discovering process. I remember the day when I hired a taxi for a half-day in Cuzco, with his broken English and my broken Spanish. I also remember the day when I climbed Pisac, with a native guide, with the breath-taking view of the Peruvian Sacred Valley spread below me. It's a collection of emotional peaks that I don't even have words for.

I don't know where my home is. Perhaps I'll spend the rest of my lifetime trying to find it, or I might just give up and just live with it, for pragmatics' sake. I often feel a restlessness to move and travel, which is somehow an effective way of detox. I am pragmatic and think that I won't go head over heels in this, but it's just a matter of self-control and mind over matter. 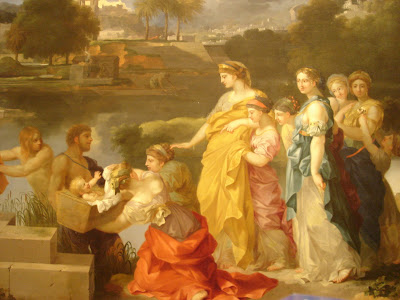 (Women and Baby, from my National Gallery of Art Series)