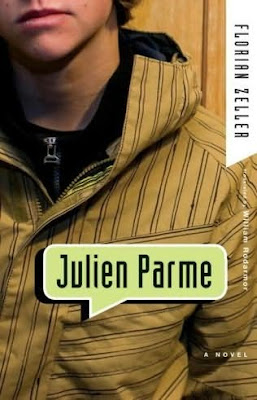 Honestly, I do not know what to make of this novel. I was angered and discontented at the same time.

The whole novel takes place as a flashback. The first chapter suggests that he is on a train, en route to a rather remote place in France, somewhere outside of Paris. And he hates going there, since there would be none of his friends in the destination, and he is going as a punishment for his delinquent behavior.

Then, the next 19 chapters, up to the very end, describe his weekend. It starts on a Friday night, where there is a party that he wanted to attend, but he did bad in school or something like that, that his mother forbade him to go. Then, he decides to get out of the house, and steal his mother's boyfriend's credit card along the way. He withdraws enough cash to take taxi rides, buy drinks, buy champagne, and other fun stuff.

Saturday, he meets the girl he likes. He punches her future step-sister's face hard enough that her nose is broken. And he buys a ticket to Rome.

I won't tell what happens on Sunday, because that would be giving away the whole story, but I suppose it is a novel that I am not too pleased.

On the one hand, the novel is about this adolescent who is too full of himself, I hated him. If he were one of my students, I would be so pissed, with him acting like he knew all the lessons one can learn from the world. On the other hand, the fact that I had this reaction to the novel suggested that the writer did a good job, because I actually got myself involved in the story. You know, there are books that make people cry, this book made me mad. So in that sense, the book was good.

I suppose this is a book about delinquency, which is something I do not understand. Of course, I haven't seen plenty of parent-child interactions when I was in Europe on vacation, but the little I saw involved a brat shouting to a parent.

Should I recommend this? For the content, possibly no. But for the writing style, definitely. 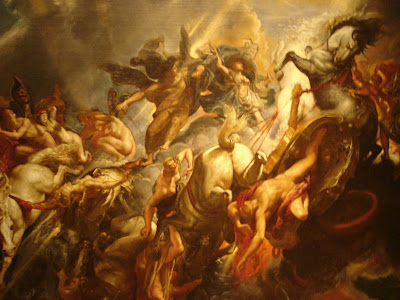 (Angelic Painting, from my National Gallery of Art Series)