So the news headline today is that one abortion doctor was gunned and killed while in church. If you check this article, a Kansas doctor was gunned down while serving as an usher in his church, due to the fact that he is one of the few doctors who perform late-term abortions in the country.

Now that is just plain hypocritical. It is also very Machiavellian. These anti-abortion advocates are against killing the unborn, but I suppose they are just fine with killing those who are alive and kicking. The end justifies the means.

I just am floored when I see politics and social dynamics here in the USA. What does one's abortion stance have to do with politics? Why does the fact that Sotomayor's abortion stance is not known disturbing and newsworthy?

I do not consider myself to be pro-life nor pro-choice. I suppose if there were a term for it, I would be pro-consequence. If you chose to have unprotected sex, and then get impregnated later, then face the consequences of taking care of the child. Life operates under a multitude of constraints. Having sex has a consequence, and that will always be in the equation. In that respect, I can see my views aligning with pro-life people.

That being said, I also believe in penalties. If a person goes on a killing spree and shoots 20 people, he should die. That is just another consequence. Again, there is a constraint: if one kills a person, then the person has to shoulder the consequences. If one is a serial killer, then why would the taxpayers shoulder his upkeep while he spend the rest of his life in prison?

Now this seems to be contradictory with the previous paragraph, no? Since after all, abortion doctors kill lives. So based on this reasoning, they should be put to death. Since we can in a certain level, equate abortion to murder.

However, if we look worldwide, murder is a crime. Every country considers that. But abortion, not really. There are places where abortion is legal. So is this decision based on the concept of sin? Or the concept of crime?

Anti-abortionists would sometimes use the argument "What if you were the one who were aborted?" But that is moot. Sure I am grateful that I am alive right now, but if I were aborted, how would I know? I would have been dead, so I would not have had the chance to feel sad or unhappy about it.

I suppose I value free will. But with free will comes consequences. Every human being has the free will to choose what he or she will do to one's body. Sometimes, there is a conflict of interest, like in the abortion debate. But this is still a debate, so choosing one over the other does not give other people the license to take the lives of others and commit a crime. I may not believe in the concept of sin, but I very much believe in the concept of crime.

Looking back on the killer and his actions, I suppose his actions still follow the constraint-satisfaction model. For him, one constraint became too powerful to ignore, and that is, he felt that he had to terminate the life of his enemy. He was just being selfish. But I suppose, he was too selfish that he forgot to put into the equation the consequences of taking the life of someone else. 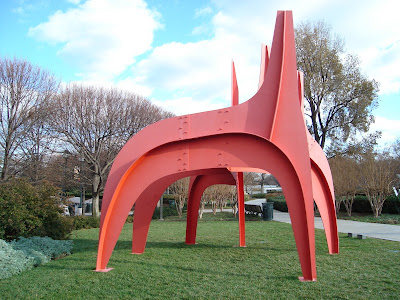 (Red Object, from my National Gallery of Art Series)