I use the services of a social networking site. In this way, I can keep in touch with what goes on in the lives of the people I am friends with.

People move here and there, they settle down and then move away, and because of the flux, friendships sometimes get broken, perhaps abruptly, or slowly. That's why I suppose this is where the social networking sites come in, because in this way, there is a less degree of losing contact.

Two people from my past got married. One was a classmate of mine from 7th grade (before we left for Osaka in 1995) and another was a classmate in college. The 7th grade classmate got married to someone I don't know, and her bridesmaids were a bunch of my other classmates. It was nice seeing their photos, still stunning and gorgeous.

The other one who was a classmate back in college got married in Dubai, also to someone I don't know. It seemed that the marriage was simple but nice. I didn't know anybody in the pictures except for her, and if I hadn't noticed that she added a new surname, then I would not have guessed that she got married.

I have a good friend in which we both belong to each other's inner circles. We've talked about this before to each other, about leaving and the prospect of losing touch with each other. I suppose as much as people would try, people will come and go. I don't have contact with anyone in 1st grade (which was in Honolulu), I have very minimal contact with my classmates from 2nd to 6th grade (which was in Manila), I have contact through the social networking sites with my classmates from 7th grade (which was in a different school in Manila: my best friend back then just sent me a one-liner email as a response to my mass-post email). I don't have contact with anyone from my 8th and 9th grade class in Osaka, and the only contact I have with my 10th and 11th grade class in Osaka (which was in a different school) are three people: an aspiring documentary film director who is now based in Tokyo; a businessman with a Filipino girlfriend; and a Belgian former exchange student who is now working in London after getting a PhD in fluid mechanics, who also got married within the past year to a lovely Japanese lady. And no, I have no contacts with the people I went to school with in Guam as a 12th grade student. Finally, I still have few contacts from the people I went to college with. A few are living in Singapore, one is living in northern Japan, and I don't know about the others.

So I suppose when one is bored, nostalgic, and want to know what happened to the others, I go and view my friends' photos, and see where they are now. I didn't realize that one of my friends are now based in Bogota: I was really surprised at that. Another good friend of mine is now living in Geneva: the last time I saw her was in New York City 3 years ago.

Anyway, the world is an amazing place. I am glad that I was born in a modern society, and not in some other society, where the only world they know is the village they belong to. It is amusing to imagine what my life would have been if I were like that.

Oh well, if my friends were to be connected in a network, I wonder how it would look like. 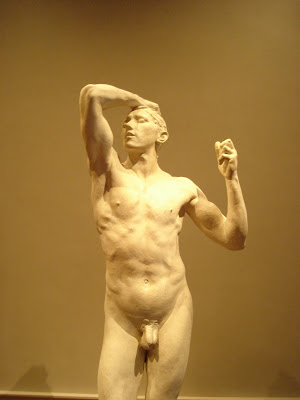 (Nude Man, from my National Gallery of Art Series)