The other day, I saw a student on the bus. She was weird. Well, the bus ferries students from the South Campus to the North Campus. Whenever I do not have a ride to school, I take the bus, because my apartment is near South Campus, but my office is in North Campus.

Anyway, the bus usually stops first at the main loop once it reaches the North Campus. However, the other day, it didn't. Instead of just driving straight from the entrance road, it turned right and first stopped at the on-campus apartment complex.

What the heck? If she wanted to get out, she had ample time indicating that, and could have gotten out when the door was open. The driver did not see her and so the door remained closed. Then the bus proceeded to the main loop, where everyone, including her, got out of the bus.

I suppose what happened was that the bus did not do what the girl expected the bus to do, that is, to head to the main loop and drop off passengers. The girl became worried that she cannot get off at the proper location so she decided to save herself and try to get off prematurely.

Now the question is: is this a case of not being able to understand the language? I see things like these happen often. It's as if people are not confident of their actions, and most of the time, these are foreign students. They cannot make up their minds, so they act awkwardly.

But I suppose the thing that still bugs me is that people do not speak up whenever they think something is wrong. It's as if it is a fault to speak up and ask. Maybe it is the language barrier, I do not know, but I suppose the only way to overcome this is by actually taking the initiative to talk, and committing mistakes. Because mistakes aren't really painful. At most, they are embarrassing. But that is the only way people can learn fast, because they will remember. 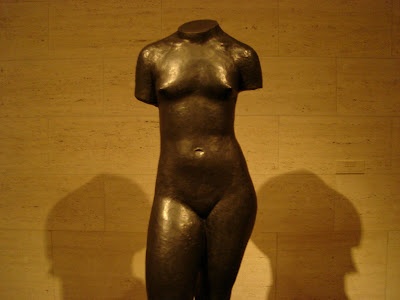 (Nude Woman with Two Shadows, from my National Gallery of Art Series)