Seriously? This is what the government officials do?

Back in March, Chip Tsao, a Hong Kong-based columnist, made a comment about the Philippines having no right to claim the Spratly Islands from China because "as a nation of servants, you don't flex your muscles at your master, from whom you earn most of your bread and butter." Due to that comment, the Philippine government declared him an undesirable alien and barred him from entering the country. This was also accompanied by a statement by a Philippine senator, denouncing this comment.

Then a couple of weeks ago, Alec Baldwin made a comment in the Late Show with David Letterman that he would want to get a Filipina mail-order bride, or a Russian one. Again, due to that comment, the Philippine government declared him an undesirable alien and barred him from entering the country as well. This was also accompanied by a statement, again from a Philippine senator, denouncing this comment.

Now let me get this straight. I do not agree with the comments that have been given by Chip Tsao and Alec Baldwin. I do understand that these are offensive comments and that the Philippine government has every right to bar these people from entering the country. What I do not understand are the reactions from the government officials, with the senators taking it their personal goal to denounce these statements. I do understand that they are defending the country, in fact, if one looks at Senator Pia Cayetano's statement against Chip Tsao here, she has a good point. There is nothing wrong with being an honest worker overseas.

However, there was a better answer that I wanted to see, and yet didn't.

Have these government officials ever wondered why the citizens of the Philippines go overseas to work? Why the Filipinos go to dire straits and arrange themselves to be wed overseas, just in exchange of money? It is because the grass is greener on the other side. And the government is not making it lucrative for people to stay. There aren't any jobs, and if there are jobs, it pays just a fraction of what is available overseas. Now why do these government officials waste their effort in denouncing offensive statements, when that is just a short-term solution to the problem? Why not provide a long-term solution and actually fix the country so that it will move forward, so that people don't have to advertise their bodies as mail-order brides in exchange of monetary security, so that people don't have to go overseas to work as domestic helpers, so that people don't have to go overseas to be laborers? That is a better solution than simply giving a threatening statement against these offensive comments. Because if the country indeed moves forward, then people don't have to go somewhere to thrive, and other people will see that our citizens aren't just worthy of being a servant or a mail-order bride. 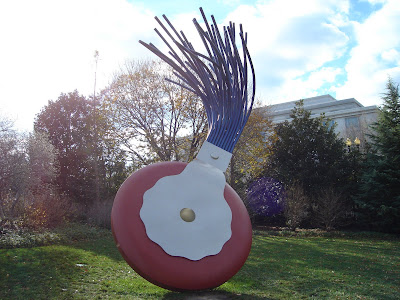 (Weird Instrument, from my National Gallery of Art Series)