Pain. I suppose if I were to pick one word to describe this novel, this would be it. Every chapter oozes with pain, and I, the reader, just cannot imagine that events such as these occurred in the planet.

Johnny Mad Dog (written as Johnny Chien Mechant) is a novel by Congolese writer and chemist Emmanuel Dongala. It tells the story of a civil war that occurred in a country somewhere in Central-West Africa. It is unnamed all throughout the book, but there are several clues as to what country inspired this. The neighboring countries of Congo-Brazzaville, Zaire (presently known as Congo-Kinshasa), and Rwanda were mentioned. People used the CFA franc as a currency. Women used colorful clothes called the pagne for everyday use and wear. The country is a Francophone speaking country. There was mention of the previous reign of Mobutu (perhaps Mobutu Sese Seko). And there were mountain gorillas in the midst of the forest.

Add to that the fact that Emmanuel Dongala is Congolese. And both Congo-Brazzaville and Congo-Kinshasa had civil wars in the past two decades.

Anyway, the story occurs within the span of about a week, and is told through two contrasting perspectives. This, I suppose, is the best aspect of the book. It is told in alternating chapters, through the perspective of Laokole, a 16-year old girl, trying to escape the militiamen who at the outset of the book, were looting the villages. She is escaping with her younger brother Fofo, and her mother, who happens to be a cripple, since previous soldiers broke her legs. The story is also told in the perspective of Johnny Mad Dog, who goes through several nomenclature incarnations at the outset. The reader gains access to his thought processes, and even though in some level, they are logical, the logic is so bizarre and uneducated. The character is such a paradox that one cannot help but be fuming in rage at him.

Through the span of 31 chapters, the story of how the Dogo-Mayi tribe tries to eliminate the Mayi-Dogo and the Chechen tribes are told. Looting and rape are commonplace, and plenty of men were killed just because they fell within the 14 to 45 age bracket. The militiamen tell the Mayi-Dogos that they should have chosen better than to be born a Mayi-Dogo, and that is why they are being killed in the tribalist genocide. Another paradox is the fact that the people really cannot tell which one is a Mayi-Dogo and a Dogo-Mayi, since they both speak one language, given the fact that they live in the city and not in the village. The militiamen have this crude test based on language, but everyone fails, since nobody knows their ancestral language anymore.

Needless to say, I liked reading this book. It's human nature at its worst, and a highly realistic one at that. I liked the way the same series of events were portrayed through two different perspectives: it seemed that there were two authors who wrote two books and combined them together. Even though I was not familiar at all with the cultural aspects of Central Africa, the vivid descriptions were more than enough in invoking the sights, the smells, the blood, and the fighting that this book was all about. The novel ends perfectly: it stays within a realistic ending, without giving some fairy-tale finale, and staying true to what happens when humans lose their sense of reason. 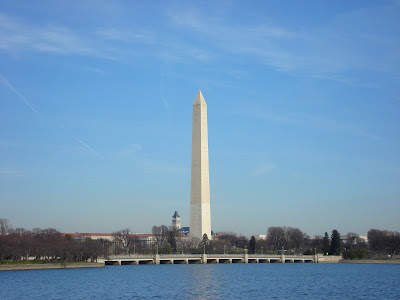 (The Obelisk From a Different View, from my DC Memorials Series)