Three years ago, while I was with my parents in this little quaint restaurant that served hearty Colombian fare, I somehow vocalized my desire to go visit South America. It seemed that the Churrasco platters that they served were too delicious it made me want to visit.

Anyway, my father had the typical reply, that I would be kidnapped, and that South America would be very dangerous for someone who isn't from there.

Fair enough, so I read into it, and sure enough, there were horror stories of tourists being mugged, raped, murdered, everything you could imagine.

But then, there were also tourists who enjoyed their trip and went back safe.

So, did I go? Obviously, I did. The next year, I bought a round-trip ticket to Quito and had a blast. I even took their nice yet rickety-looking buses, as I plied the Pan-American highway, on my way to the equator. There were dangerous places, yes, but as long as one has a good traveler IQ, and knew how to avoid those stuff, then life was good.

See, a tourist doesn't need to flash. A tourist that has good traveler IQ need not wear those beige hats, hang a camera from their neck, and act obnoxious as if they are advertising that they have all the money in the world. One can blend with the locals and still have a good time.

Besides, the logic that "a place is dangerous so one should not travel" is flawed. In fact, look at the current news for example. A metro train crashed in Washington DC, and a couple of French tourists got lured by a criminal and ended up being involved in a car chase with NYC Police, after immediately stepping off John F. Kennedy International Airport. Danger can be everywhere. The key is knowing how to avoid them. 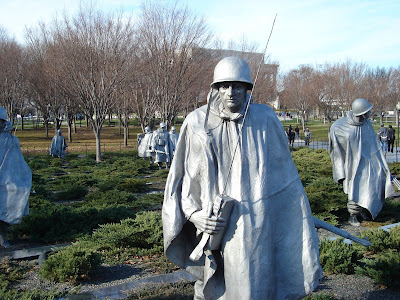 (Soldier with Radio, from my DC Memorials Series)