So the summer usually means that there are plenty of construction around campus. Besides, they say that there's only two types of weather here in the Northeast: winter and road repair.

Anyway, the system of roads in the South Campus are currently being dug up. That means that the bus that takes me to North Campus (where my office and lab are located) follows a weird pattern for the time being. Many roads are closed, and there are plenty of detour signs all over the place.

Now what I do not understand are the cars. I mean, hello, the detour signs, the road closed signs, they are huge, and written in reflecting paint of bright orange and white. There are also triangle cones, big orange drums, barricades, all that sort of stuff, that clearly tells the driver that hey, you cannot go through there, because if you do, you will encounter this big bulldozer digging up the road in front of you.

But no, they still try to go, all the way until the end, until they see this big dump truck in front of them, and then they try to execute a U-turn in the middle of this pathetic little road. If they only read the signs, and believed them, then they would not have to do that.

The other day, I saw this small car. He was small enough to actually ignore the Road Closed sign that was standing on one side of the road and squeeze himself through the barricades on the other side. Then he saw the fence and the dump truck. He turned back, but instead of following where the actual detour was, he turned into this rather big driveway next to a building. That's just a freaking driveway, dummy! You still cannot go to the other side by heading that direction. Sure enough, after a minute, I see him pulling out of that driveway again and coming back where he came from.

So yeah, apparently, people do not read. How pathetic. 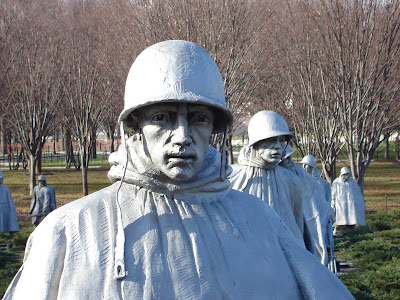 (Another Close-Up of Soldier with Cape, from my DC Memorials Series)