So yesterday, I attended a wedding. It happens that my friend's sister is getting married, so I was my friend's date. I also was the assistant photographer. Yeah. I was. Really.

Anyway, the wedding was rather small, with only a small part of the two families invited. This is actually the third wedding I have attended as far as I can remember, and this one is the first in which I actually intimately knew the family.

Anyway, it was held in a quaint picturesque part of town, with a gazebo. My friend provided the music, given the fact that she plays the harp, and her sister was the bride. Her other sister was the bridesmaid, and their father happens to have a degree in photography. However, given the fact that he needs to be in the procession, he can't take those shots. So half an hour before the whole thing began, I was briefed as to how to take shots that had the right framing, angle, lighting, et cetera. I told him that I rarely shoot people, so I may need to have some crash course.

Anyway, that was that, and I forgot to mention that the wedding was Hawaiian-themed. Things were relaxed, and the ladies had daisies in their hair. The food was quite nice too. And the families were interesting, to say the least.

After the wedding ceremony, we all went to this park in another part of town to take pictures of the bride, groom, and family. Actually, the decision to go here was partly due to me and my friend, given the fact that we were the ones who suggested this location. There were water, ducks, and trees. And while we were there, there were five other wedding parties that were having their pictures taken. It was quite a quaint and interesting place. Again, I took photos when the bride's dad had to be in the photos. I took multiple shots in case some turned out to be bad.

Then we went to the bride's house afterward just to hang out. I realized then that weddings are whole-day events. They can be stressful no matter how pleasant and quaint the scenery is.

So yeah, that was my Saturday. And I suppose you now notice that I have a new photo series up. This is the start of my DC Memorials Series, which is a collection of photographs that I took in the National Mall in Washington DC, focusing on all the different memorials that can be seen in the area. 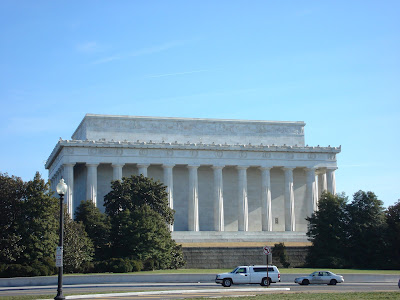 (The Lincoln Memorial from Behind, from my DC Memorials Series)