So I watched this funny movie entitled L'auberge espagnole, which tells the story of a French graduate student, who went to Barcelona for one year to study. Why do I find myself watching plenty of films set in Spain recently? Maybe it has something to do with a possible change of scenery?

But no, let's not go there at the moment, given the fact that nothing is sure yet.

Anyway, I saw this film, and although I liked it, I didn't even try to imagine living like the characters. I would possibly not survive in an apartment with 7 other people, with different living habits. In more ways than one, this movie was really a mélange of sorts.

Funny that this word, which means "mix" in the French original, means something different in Austria. My dad would always order a "mélange" after dinner, which refers to some type of coffee.

Anyway, speaking of apartments, I am showing my apartment to someone this coming Monday. Finally, someone answered my ad. Hopefully, I get someone who is decent, and not like the previous roommates that I had. It seems that I do not have luck with roommates, all the previous roommates I had were bizarre, and every time I think that nothing else would be worse than this, but then that would always be falsified. At least I haven't had a roommate which was as bad as a friend of mine's, which somehow apparently turned out to be a drug-dependent loser, who got arrested by the police. That's why I don't want to advertise my place online yet, my primary way of advertising is through posting flyers all over the campus, so that there is a higher chance that the person is also a student, and not someone from who-knows-what.

Speaking of which, I need to replenish my flyers. Unfortunately, I need more tape. 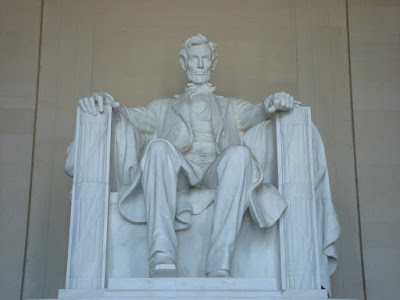 (Abraham, from my DC Memorials Series)