Yesterday was a bizarre day. A guy approached me while I was waiting for the bus to arrive that would take me to the other campus, where my apartment was close to. I was simply sitting on a bench, when he approached and said,

Him: I think I saw you before.

Him: Where are you from?

Me: Why would I tell you?

Him: Are you Asian?

Him: Are you from Thailand?

Me: No. Are you from Korea?

At this point, I became amused that this weird stranger with broken English decides to talk to a stranger, me. I figured, he might just have the extra-ordinary courage to talk to someone to make his English better, so I decided to play along. He then went on trying to guess where I came from. Vietnam, Laos, Malaysia, Indonesia, Burma, Singapore, Brunei, every time I said no and remarked, “It’s right smack in the middle of Southeast Asia!”

In the end he wasn’t able to guess, so I told him I was from the Philippines. Then the bus arrived, and we both boarded the bus. We sat down, and talked about random stuff. Apparently, he is a graduate student in the Dentistry department, and then I also told him what I study. He seemed very curious about where I live, and so I told him which street I lived, and then the topic of the conversation drifted to the topic that most graduate students are concerned about, that is, rent and living arrangements. I told him that I am currently looking for a roommate since my former roommate just left.

Then I don’t know, I just asked him what he does for his spare time. He mentioned that he exercises, and then I said, “Yeah, I need to do that too.” To which he replied, “Yeah I think so too.” “Wow, you are too direct. Very exceptional for an East Asian.” Not that I was offended, but fine, just add that to my list of reasons why I want a few pounds off my weight.

And then the interesting turn happened. Somehow the conversation drifted to the point that religion was brought up, and I told him that I do not do religion. He brought up the concept of “temporary life” and asked me whether I think about death. Of course I think about death. I think that death is inevitable, and people are just so hyped up about it, but if they accept that people die, then things would have been smoother. I told him that people just invented the concept of an afterlife because they want to do so many more things, and they want hope, albeit a false one. I told him that people just construct the afterlife because they wanted to believe that something better is lying out there, after death. I told him that God and religion are just constructs that humans invented because it is their attempt to explain the currently unexplainable phenomena in the world.

That’s when he started preaching. He said that God appeared to him personally, and that he knows what is after death.

At first I was nice, I told him that my beliefs have less assumptions than his, and that it is the simpler hypothesis. But his arguments started getting circular. At this point, another person joined in. She is a girl, Asian, and later I would learn that she is an English major. And she started asking questions to this poor Korean guy, who started losing his answers. The Asian girl was relentless, asking the guy how old he thinks the world and its species are. The girl pointed out contradictions, as to how the guy, who is studying dentistry, can believe in an assumption that humans are just 6,000 years old, when there is carbon-dating and uranium dating, using proven tenets of physics, that place the age of the human race to be far older than that.

I later realized that the Asian girl and I have the same fundamental problem with regard to religious beliefs. And that is we cannot understand how someone can take everything to be true and believe in it just because a certain book tells them that it is true. I asked the girl later, whether she believed in God, and she said that she thinks that there is a Supreme Being, but not as in the form that the Bible says.

By this time, we all are in the other campus. We even took the time to sit down on a bench, and argue with the other guy. Contradictions regarding the portrayal of God were raised, as to how in the Hebrew Scriptures, God is a harsh and wrathful god, raining fire and brimstone to people, and opening the earth to swallow people up. But in the Greek Scriptures, he is a kinder person, sending his son so that everyone on earth can be saved.

Regarding that, did God change his mind? Wasn’t God supposed to be all-knowing, and that he should have known that people would make these types of decisions, and so he should have done the proper thing in the first place? God seems to have changed his mind, and if he changed his mind, then he isn’t all-knowing? With that, the Asian girl brought the argument about the conversation that Abraham had with God, that God allowed Abraham to argue whether or not to destroy Sodom and Gomorrah. The fact that God allowed Abraham to argue with him suggests that God changed his mind. If he already had his mind set that he would destroy Sodom, then he should have told Abraham that no matter what Abraham thought, he would destroy the cities. 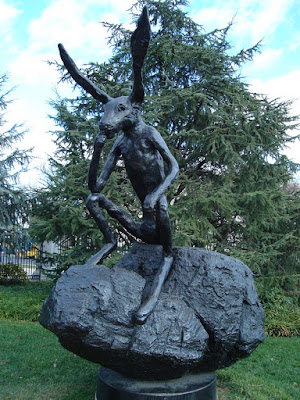 (Quasi-Rabbit, from my National Gallery of Art Series)