See, the thing is, friendships are a type of investment. One invests ones time and effort in getting to know other people. One opens up a certain part of oneself and exposes oneself to the elements, hoping that there is something one can get in return. I tend to believe that friendships start as selfish acts: one identifies another person as someone who one can get along well with, and that this other person has traits and characteristics that one can benefit from. Over time, however, the selfishness goes away, and there are things that people do for their friends that are altruistic in nature. But, overall, this can still be construed as a selfish act, because people do seemingly altruistic things to friends because they themselves do not want to lose an asset, namely, the friend.

Now let me introduce the factor of change. Even though I tend to think of myself as a pragmatic person, and that change is normal in the cosmos, I have a hard time accepting that. I hate moving before, since that accompanies farewells and the fact that some people I am friends with may not be able to see me again. Ever. So, the most practical solution to the problem is that one should just not have friends at all. Easier goodbyes.

But I have to admit, that is a bad solution. One inevitably makes friends across time. So I suppose I took a new strategy: to be proactive in friendship, and to try to preserve the friendship even though people move on and away.

But, change is still in the picture, and sometimes, people change even though you are still here. You start to wonder, whether this person is still the person that became your friend a couple of years ago. And sometimes, one gets surprised at the difference. One wonders whether this is the thing that one signed up for back in the days.

See, the thing is, it makes me wonder whether I am still a friend, if I am treated like I was unwanted for three months. Then, three months later, I am wanted again. Hooray! I am sure there was a logical explanation for that, but then, I find myself tip-toeing over eggshells and broken glass in the process. I would want to think that other people consider me as a friend because of who I am. So if I need to alter my behavior just to please a "friend", then that would seem ridiculous. I am not a towel, Vicks Vaporub, or any other soothing medication of any kind. Friendships can be a support group, but primarily, it is a partnership of two free-standing, independent people. Yes, it is okay to support each other in times of distress, but it is not the case that one person only makes use of the other whenever one needs the other person. Heck, that is not friendship at all.

In short, I am annoyed, I am irritated, I am hurt. It sucks that of the few times that I open myself up for others to see, then this is the time when someone sticks an emotional knife in my chest and twists it. And I do not know how to process it aside from ranting about it. 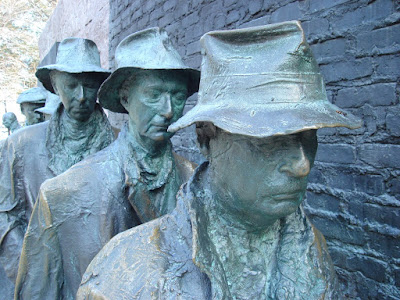 (Close-Up of Metal Queue, from my DC Memorials Series)