So, one of the things that I have learned is that one can tell where the person comes from, just by hearing what the surname is. And upon looking it up in the Internet, sure enough, there are even people who charted all the names and the associated geographical area within India. Wow, I am impressed. I suppose this isn't the norm in the Philippines: when I hear a surname, I cannot place it within the map. Unless, of course, we are talking about very Tagalog names, like Dimaculangan (one who will always have plenty) or Macatangay (one that will stray others away), in which I have a very good hunch that it comes from the province of Batangas.

Anyway, aside from place of origin, apparently, one can tell what caste the person comes from. Not only that, one can tell what profession the family traditionally has. All of this information makes a good trivial pursuit when one is getting sick of looking at the dissertation proposal.

However, I find it a little disturbing that a lot of these information can be gleaned just by hearing one's name. With one name comes plenty of stereotypes, and all the images that these stereotypes carry just pop into another person's head just by hearing what one's surname is. In a way, I find that somehow disturbing. I'd rather be known by what I do and who I am, instead of what my name means traditionally.

But hey, I suppose that is simply human nature, to know where one is from. After all, that's one of the first questions people ask whenever they encounter someone who comes from the same country as one is. I bumped into a Filipino in Lima's Jorge Chavez International Airport last year, as I was heading back from my backpacking trip. One of the first questions he asked was where I was from in the Philippines. It is just a strong desire, to know where one is from, that we ask that to compatriots we meet overseas. However, the Filipino naming system isn't as predictable as the Indian naming system, given the fact that back in time, the Spaniards changed all the names of the Filipinos. They had a book, entitled Catálogo alfabético de apellidos, which listed possible surnames in the country, and people had to pick one. This was done for census and tax purposes.

Anyway, so yeah. I am wiser now with respect to Indian names. Yay! 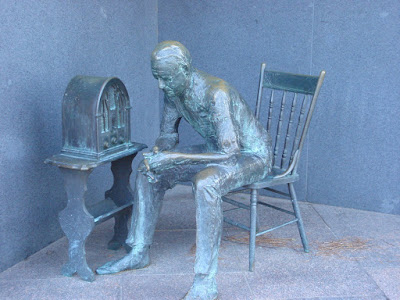 (Man and Radio, from my DC Memorials Series)