Yesterday, we went to the theater to see a movie. After evaluating all of the movies showing (there was Bruno, which I don't really appreciate the comedy of it; there was Harry Potter, which from my perspective is hard to follow since I haven't seen all of the previous movies; there was Transformers, which I haven't seen the first one so I don't know the links; there was also Ice Age, but we were not in the mood for animated weird animals), we decided on seeing The Proposal.

So this is a romantic comedy, starring Sandra Bullock, who at 44, still looks smoking hot; and Ryan Reynolds. If you want to know what the movie is about, just look it up in Wikipedia or something; this isn't a movie review post.

Anyway, let's go to why this entry is titled this way. The thing is, after the movie, my friend asked me how I liked that movie. I said, Well, it's a romantic comedy, and based on my expectations of what a romantic comedy should be, I liked it. I was comedified romantically. Now, my friend asked me, on a scale of one to five, how many stars would I give this movie? I told her that I would give it a five, and she was surprised.

Backstory: the thing is, we watched Definitely, Maybe quite a while ago, which was another romantic comedy starring, yet again, Ryan Reynolds. And I liked that romantic comedy especially, since even though it was a romantic comedy, it had an air of mystery, and it got the audience involved due to the guessing game between the daughter and the father.

So, apparently, my friend was surprised on my evaluating process. Now, this is something I explained yesterday night, that I do not have a universal set of constraints when evaluating whether I like a movie or not. My constraint set is not flat, instead, it is hierarchically structured. I do not evaluate movies in the same way as to whether I like it or not. Yes, I liked Definitely, Maybe because of the ingenious way of presenting the story, but also because it satisfied all the expectations I have of the romantic comedy genre. The thing is, I evaluate movies by what genre they are in. If I know I am seeing a horror movie, I have a set of constraints that do not apply if I am seeing a romantic comedy. I have expectations for what a horror movie is, that is different from my expectations for what a romantic comedy is. And since The Proposal satisfied all my expectations regarding what a romantic comedy should be like, I decided that I liked the movie.

I suppose my thinking pattern is just like how I decide what I like about food. I like my chutney spicy and sweet. I like my cake sweet, but not spicy, and without a lot of icing. Just because they're both food doesn't mean I use the same constraint set for both items. I definitely do not want spicy mango and coriander cake, nor devil's food chutney. I have different expectations for both, and I evaluate both items as to whether I like it or not using different constraint sets.

So, after explaining that, I was asked, given how I think, how is it that I am a human, and not a robot. Well, I explained back, I think, therefore I am. Robots simply follow what they are programmed to do. I just happen to have a very elegantly structured way of thinking. 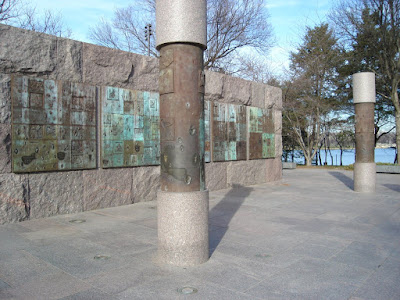 (Artistic Wall and Pillars, from my DC Memorials Series)