I Need to Connect to the Linguists

So today was a very fruitful day so far. I had a meeting with my adviser, who read my dissertation proposal's second draft over the weekend. And I was happy with the result.

So, Draft 2 was a significant departure from Draft 1. It increased for about 8 pages, and it had more meat in it than the previous one. It pitted various theories and models of the phenomenon I am interested in, using theories ranging from cognitive psychology to linguistics to artificial intelligence.

Anyway, the main interesting comment that I got from my adviser was that I needed to connect to the linguists. To explain, that meant that I need to relate what I am working on to the main interests of most linguists. Apparently, what I had written was very much grounded in cognitive experimental psychology. It was a proposal that for all intents and purposes, looked like a proposal coming from the department from the next building than the building I am registered in. That is fine, after all, my research is very inter-disciplinary in nature (and my committee is coming from two departments as well). But, for purposes of marketing myself, my adviser told me that it would be advisable to package myself and my research so that it would sell both to the psychologists, the psycholinguists, and the linguists of the world. In that case, I would have more hiring options when I finally enter the job market in full force.

So later on, after the meeting, I found myself contemplating that thought, that I need to connect to the linguists. Funny I find that, because, I started my academic career as a linguist. I did my undergrad in linguistics, and came to do graduate school with no inkling whatsoever to do brain-related stuff. I remember being interviewed in Manila by a professor once, since I was about to be inducted to an honor society, and they wanted to know more about me. I remember telling her that I was thinking of doing fieldwork in southern Africa, studying Bantu languages that are about to disappear.

Now, I don't really care about fieldwork that much. And perhaps by virtue of my fascination with empiricism, with the scientific method, and also because of the dissection of the human brain that I did about a year ago, I decided that I am more fascinated about how the human brain works when it comes to language processing than anything else. And with that comes a dissertation proposal that is heavily experimental and grounded in cognitive psychology, and possibly alienating to the linguists in the world.

There are psycholinguists that don't have many linguist bones in them, to quote my other adviser. There are also linguists who could care less about psychological reality in their linguistic theorizing. I am aiming for the perfect mix: a linguist who knows how the brain works, who cares about psychological reality, and a psycholinguist who is well-versed with linguistic theory. We'll see how successful I am with that in a couple of years. 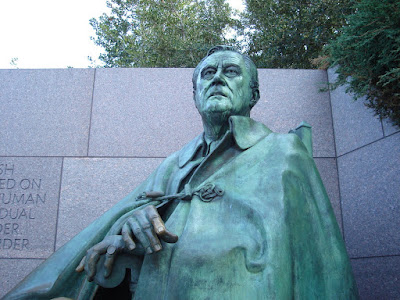 (Roosevelt, from my DC Memorials Series)