Do people take a dump in public? Most people do. Believe me, I also do it from time to time. People have their own defecation rhythms, and even though it may always involve doing the act before one leaves the house, chances are there have been times in the past when one is out of their homes and the urge to defecate comes along. I used to have the aversion to taking a public dump, since I am not too comfortable with using a public toilet (you never know how clean a Philippine public restroom is), but here, at least in the university, chances are that the restrooms are clean.

So, why is it that earlier today, when I entered the third floor men's restroom in Park Hall, that there was this one toilet bowl, fully mummified with toilet paper, just so that a person can sit on it?

See, the thing that irks me is that there are people who are so fearful of germs (mysophobia anyone?), that they use hand tissues to open doors and other objects that many random people touch, and they pile layer after layer of toilet paper on the toilet seat if they ever need to use it. I don't have an objection to those acts, since, after all, we all have our quirks and idiosyncrasies, and if one has the phobia of dirt and germs, then I can't really do anything about it.

However, the annoying thing is when people do not clean up their mess after they are done. How ironic is that? You pile up layer after layer of toilet paper on the toilet seat so that your pretty little pink ass doesn't come into contact with random germs from random people, and yet when you are done, and everything is flushed, including the dirtier substance such as your own poop, then you just leave the mummified toilet seat for everyone in the universe to see? I bet that the toilet seat just became messier than when it wasn't mummified for the sitting convenience of one person. It is so ironic that one person who is obsessed with cleanliness actually does something to make it unclean. 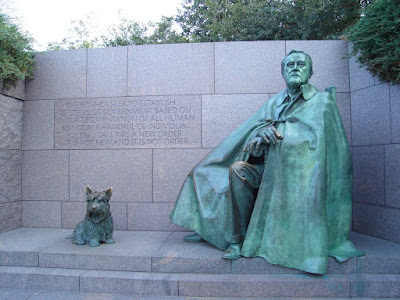 (Roosevelt and Dog, from my DC Memorials Series)