So when I logged on to the Internet today to get my daily dose of world affairs, a strange piece of news got my attention. Apparently, a Russian woman hurled a ceramic cup at the Mona Lisa in the Musee Louvre in Paris. You can read the news here and here.

It seems that she was mad because she failed to get French nationality. And of course, one cannot attack physically the French government easily, so one attacks something else with easier access, such as the Mona Lisa.

Now, good old Mona is safe, since she is protected by a glass structure that is apparently bullet-proof. The woman, on the other hand, is arrested. I find it bizarre that people do things like these, and the news report also mentions other cases of weird behavior targeted on artwork, such as a woman kissing a painting and leaving lipstick, and things like that. I wonder what their constraints were.

But the thing is, I also had a history of diverted frustration. But not on paintings, but on animals. When I was little, there were times in which I cannot stand my sister, and I would get so mad at her. I wanted to hit her, but obviously, I cannot, since my parents would get mad, so I would hit the dogs instead. Somehow, that worked for me. The dogs would then yelp and hide from me. Yes, the good old times.

Anyway, I suppose this is enough for a dose of weirdness for the day. By the way, in case you were curious what I look like now, here is a photo of my new hairstyle. Oops, what hair style? There's no hair! 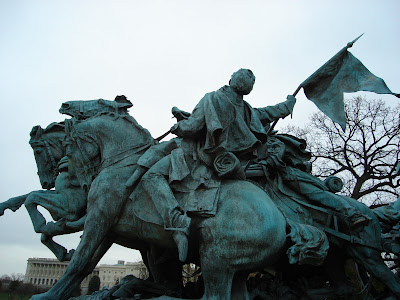 (The Rider, from my DC Memorials Series)