So I have been running every other day for quite a while now. It is funny how the world is different in the morning, when people are still asleep. I get up at around 6:00 AM, and by 6:30 I am already hitting the pavement. As I pass by houses, I hear the birds, I hear the alarm clocks, the rooms filled with still sleeping people. I dunno, somehow I find that amusing.

You know, the thought that you are already up while these sleepy heads are still hitting the sack, and there is this little electronic machine next to their heads ringing, trying to wake them up.

So the route that I take encompasses two cities. I live in Buffalo proper, but right next to the border with a town called Tonawanda. I pass by a bank, which at that early in the morning, is obviously still closed.

In front of that bank is this neighborhood doughnut store. Apparently, according to the sign, it is open as early as 4:00 AM. Now who would want a sugar rush that early? They have chairs up front, and I always see the same types of people hanging out there. Mostly they consist of elderly people, senior citizens lounging with fellow senior citizens. But sometimes, there are these obese people, whose belly looks like a barrel. Wow. I do not want to be like that. I told my sister once that I gross myself out in order to prevent myself from being like that. I imagine what the gastrointestinal system of those people would look like if they are big like that. How long their large intestine must be. How large their stomach must be. I do not want to be like that. It's like when I see these people, they ride these mechanical chairs on the supermarket, they use canes, and it makes me wonder whether they all have a thyroid problem that their metabolism is all busted, or whether they just forgot to take care of their body. And I am not talking being buff, I am simply talking about watching what they eat.

Anyway, so I pass by the doughnut shop. Obviously, the smell is nice, but I dare not go in, because that just defeats the purpose, isn't it? Good thing I don't bring my wallet with me when I run.

Then I pass seven blocks of suburban residential rows of houses. Each of these seven blocks have different characteristics. The first block is rather plain, there is a mechanic at the corner, and by that time, it still is closed. The second block has a post box at the very end. The third corner has a house that has three pick-up trucks. It also has a house that has two cars, both red. One of them is a Corvette. The fourth block has this wooden house that looks like it's been transported from the Deep South. The fifth block is the block before the little park with the huge trees, which makes up the sixth block. Finally, the seventh block is the middle school.

When I reach the school, I stop. A friend of mine resides on the seventh block. I ring the bell usually, and act as her wake-up call. Then I head back.

By the time I head back, the neighborhood scenery is different. There are more cars, more people awake, and sometimes the school buses are already plying the streets. There are more people in the doughnut shop. The bank is still closed. Time to hit the shower. 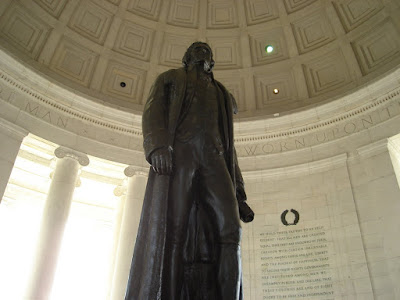 (A Closer Look, from my DC Memorials Series)