The Strive to be Normal

Everyone has at one point in time want to be like anybody else. You know, to be not weird, not standing out, not abnormal. It's just typical human psychological behavior.

The funny thing is, this concept is evident even in scientific research. Even stuff that we run in the lab has to be at one point normal, in a sense.

See, there's this thing called "norming". This is actually a procedure that ensures that our experimental items are, well, normal. Why and how is this done?

Well, for one thing, people do this so that there would not be any problems in the experiment. By problems, I mean confounding problems. See, if you have a set of stimuli you are presenting to your participants, in which you measure a dependent variable, you would want to get results that are actually caused by the thing that you are manipulating. Say, if you are measuring processing difficulty between active and passive sentences, and you indeed see that passive sentences take more reading time than active sentences, you want to make sure that the time differences that you could see are actually due to that difference, and not due to something else. Because there are plenty of "something else" out there that can cause an effect. What if the scenario you have in the sentences are weird? What if you are presenting them with sentences that describe a weird scenario, like "Colorless green ideas sleep furiously" where it is a very implausible scenario? That can also contribute to a reading time delay, which is not due to your independent manipulation.

So, in conducting an experiment, one must make sure that there are no confounding factors in the materials that you would use. This is one essential pre-test that experimenters should do whenever they do a scientific examination. And so for the research that I and a collaborator is doing, we are doing scenario norming: we are asking a group of people to rate how plausible the scenarios are in real life. This group of people should be different from the group of people that we would be using when we are running the actual experiment. Otherwise, there are sampling violations that we have to face, and the statistics will just be ruined.

So yeah, setting up an experiment can be a pain in the ass. But once everything is done right, and the numbers go in, it's a beautiful thing. I always find it amazingly beautiful that a hypothesis of mine is actually supported by empirical data, numbers elicited from a sample, from which we can extrapolate to the whole population.

The world is a chaotic place, but there are patterns in it. One just needs to do the work in finding what they are. 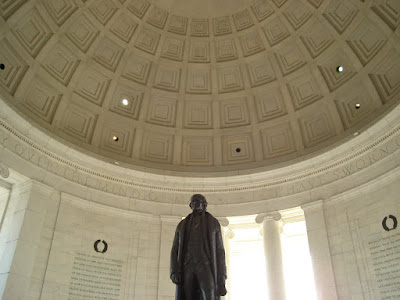 (Ceiling with Statue, from my DC Memorials Series)