So I saw this article from Lonely Planet about how different famous personalities and travelers have a weird ritual when it comes to arriving in a new place. I learned that Libyan leader Gaddafi always erects a tent in the lawn, that John Paul II used to kiss the earth of the place he visited, and so on.

Which made me think, what about me? I've never traveled much alone (well, at least I don't consider myself to be traveling much) so I don't think I have had enough travel experiences to have a ritual whenever I would visit a place I haven't been before. So in this entry, what I am going to do is to recount the travel experiences involving the very first touchdown moments in a foreign place. I wouldn't count the times in which I landed in an airport and expected to see my parents there, there ain't a ritual there aside from smiling at my dad and hugging my mom. This means I won't talk about Czech Republic and Hungary. I am also not talking about Washington DC, since a friend of mine met me at the airport.

So, the very first time in which I traveled alone, and landed in a foreign place alone, was when I flew to Taiwan back in 2005. I still remember the impression I had when landing in Taiwan Taoyuan International Airport: wow, this is real, I am actually doing this, and this is just 2 hours from Manila. There was a lot of green, and a person met me in the airport, and he whisked me to the hotel. I flew to Taiwan to give a talk in a conference. It wasn't a trip for pleasure.

Second time was Quito, Ecuador. Summer of 2007, and my flight came from Miami, and arrived around 9:00 PM. Given the equatorial location of the country, this was already dark. Given the fact that I was arriving late, I arranged for the hotel to pick me up from the airport. There were two choices, a personal pick-up (which means that I am the only passenger to be picked up and that upon arriving, I would immediately be taken to the hotel) or a group pick-up (which means that I will be waiting until other passengers who may be from other flights arrive, and together we will head to the hotel). I chose group pick-up, since it was a bit cheaper, but when I found my name, and followed the guy with it, and boarded the minivan, I thought I was going to wait for a little while, but we immediately left. Shoot. I clearly remember my dad telling me a year before, Don't go to South America. You'll get kidnapped. I immediately took notice of my surroundings, what roads the driver was taking, oh, there's a major road there, another major road, we seemed to just be heading in one direction, he took a few turns here and there, and still I was able to recognize the direction he was taking, which was the same (hopefully it was south, because my prior research told me that my hotel was south of the airport), et cetera. Eventually, we got to the hotel, and things were fine, but the fact that my expectations and what actually happened did not match was a little disconcerting that my survival skills kicked in.

Next trip was Chapel Hill, North Carolina. I flew to Raleigh, and caught a cab. Boring arrival scene. Nothing special.

Then comes Peru. I connected in Bogota, and since I had 8 hours to burn, I decided to actually get out of the airport and head to the city, since I didn't need a visa to enter Colombia anyway. I didn't understand what the customs officer told me, she looked dismayed that here's this stupid backpacker telling her sorry multiple times, so she just waved me by. There were lots of people offering me a taxi, but I went to the real taxi stand. I had a money problem: there were so many zeros in their bills, and so I had a hard time figuring out what to give the taxi driver. Good thing the driver was patient, and actually gave me a crash course in Colombian pesos. He pointed out which was which, and so that was helpful. I was also offered drugs by a random person in the street. They were little green pills.

I landed in Lima, but didn't get out, since my final destination in Peru was Cuzco. I landed in Cuzco very early, and took a cab. I told the driver the name of my hotel, and this trip was well-researched, that I actually recognized the layout of the city as he was driving. I was better prepared this time than in Quito. Upon getting to the hotel, I had a taste of coca leaf tea, the same plant where they can derive cocaine. The leaves are actually banned in the United States, so don't even think of buying unprocessed leaves from Peru to bring them back.

I also flew to Copenhagen in July 2008. This was easy. The immigration officer was this large smiling guy, who was too lazy to find my visa in my passport (which actually was two booklets stapled to each other) so he asked me to find it for him. I then immediately found the train station and bought my ticket to my first destination, Helsingor.

I also flew to San Francisco early this year, to give a conference talk. That was easy, since all it took was taking the BART train from the airport to downtown, where my hotel was. And when I flew to Seattle last month, I just took the bus from the airport until I reached downtown as well. Nothing much to write about.

So overall, I supposed, the more developed the country is, the more boring arrival procedures are. Of course, for most people, having a very streamlined arrival is a good thing, so I am not complaining. But hey, arriving in a foreign land with totally different customs can be fun too. The trick is to not forget one's senses and watch one's back at all times. 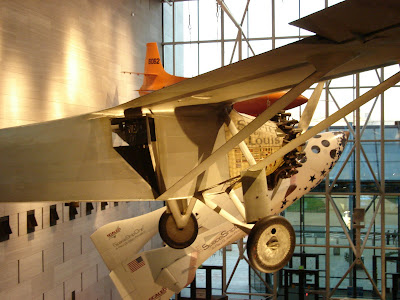 (Spirit of St. Louis, from my Air and Space Museum Series)