So, the Indian Ax Murderer is back in town again, concluding his trip this side of the border. But before he went to cross the border, we met again, for a slightly longer period this time.

Wow, that was fun.

So somehow, my other friends here in Buffalo are curious, again revolving around the concept of how can I carry on a conversation, let alone a conversation that lasted until the late hours, with a person I only just met in person once, that is, last week?

I agree, that it is a rather different way of enlarging my social circle. However, given the fact that we've carried on online conversations, sharing travel experiences, sharing travel plans for some time in the future, sharing pictures of exotic locales, all these shared instances created common ground that was enough to sustain a lovely and wonderful evening.

My throat was parched when I got back home. We talked about lots of things, including how the vocal folds work (nope, I am not converting to be a phonetician), how Tamil linguists think that the sound "oum" is the universal sound in the whole planet, about how Canada rocks, about how Buffalo's downtown is a ghost town, how much beer you can carry across the border, future career plans, future ideas of traveling together, things like that.

And I find it funny that my other friends here in Buffalo, who I have met through traditional means, are so lost in that concept, that they ask me whether I am still alive or if the ax murderer has already hacked me to pieces.

Anyway, I should say that was a great evening I had yesterday. Thank you. It's my turn to pick up the wine tab next time. 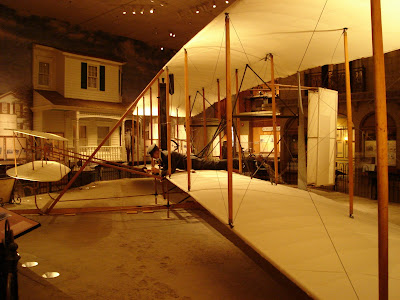 (Prototype Aircraft, from my Air and Space Museum Series)