So today was one of those days in which I wished I had a clone so that I could do all the things that I wanted to do. However, in a surprisingly miraculous manner, everything seemed to have fallen into place.

Anyway, so today was a day for a first occurrence. Today was a day in which I met someone in person, someone who I haven't met before, someone in which the interaction I had with this person until this point consisted of messages and conversations online. Yes, I met with a stranger in person. And I haven't really done that before.

Well, to qualify, it's not really the case that I met a stranger. No, actually, I knew more about this person and have been interacting with this person since December of last year. And it's just today that the stars have aligned so that I can put a body to the personality that I know in cyberspace.

So, who is it? Well, if you are a regular reader, it might be you! Ah yes, this person is a regular reader, and I am a reader of his blog as well. He is none other than the face behind Final Transit, since he was in town for a few hours on his way to an adventure.

I suppose I would rather blog about the whole thought about meeting strangers and unknown people in this entry than give the details of what occurred during the two hours us bloggers spent. I'd rather keep that for myself, since it's not just my own privacy that is at stake here.

Anyway, why is this entry titled this way? Because my good friend told me before whether I feel comfortable meeting a stranger for the first time. She told me that for all I know, he might turn up to be an ax murderer.

I do not say that her worry was unwarranted. Yes, there are plenty of people out there that have predatory activities, victimizing plenty of other innocent and naive people. And it is so easy to say that no, this is different, this is not like that. Nothing like that is going to happen to me.

However, I suppose I will go back to the way how I construct my social world. I once blogged about it here. People can be categorized in three groups, the close group, the neutral group, and the danger group. One's interaction with another person depends on where they fall into this tier system.

So, I have known Final Transit for a while now. Yes, in the beginning, as with every beginnings, people are strangers, and they start in the danger group. I assume that they are dangerous, that they do not have my best interests in mind, and that they are out there to "get me". That's just how I think. However, as time passes, that changes, as with every type of social interaction. One gets more familiar with the person, that the person becomes less of a stranger and more of a friend, little by little. That's just how friends are formed, simple as that.

Now enter the factor of cyberspace. A few years ago, the Internet never existed. So, there was no such thing as a cyberspace. Now, it is in full swing, and people can have interactions with other people even though one hasn't physically met yet. Heck, there even is this thing called cybersex. Facebook exists as well, and my actions in social networking sites such as that become extensions of my personality. What I do in cyberspace is what I am, and people who see my actions become familiar with my personality as well. This blog is another example, people can read this and learn things about me. Thus, just because one hasn't met physically does not mean that one is a stranger to another person.

Anyway, I am glad to report that I am still alive, that I have not met an ax murderer. Besides, if one assumes that every stranger is an ax murderer, then what reason can one have to leave one's house? I am just glad that I was able to put a face and body to an online persona, a blog, a voice. An ax demurrer perhaps, but not an ax murderer. 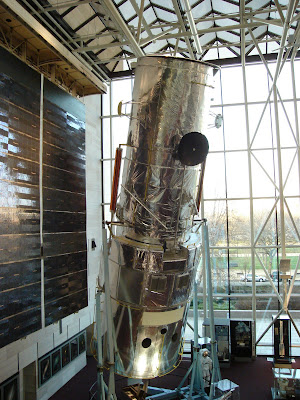 (Aluminum?, from my Air and Space Museum Series)