I came upon a disturbing news article earlier today. It had something to do with Yale University, and how it is under criticism for a certain decision that its publisher, Yale University Press, has decided to take.

It had something to do with the Danish cartoon controversy.

Remember back in 2005? When a Danish newspaper published a series of cartoons caricaturing the Islamic prophet Muhammad? And because of that, diplomatic tensions rose, with embassies being burned and protests being held all over the Islamic world? This has something to do with the Muslim tenet of not portraying the prophet for fear of idolatry.

I suppose this is a classical case of the clash between the East and the West. Of course, one would expect that there are multitudes of people that will not be happy with it, since after all, people can see this as a grave violation of their beliefs and faith.

It also is fanaticism.

What I do not get with religion and its followers is that for the most part, everyone thinks that they are right and that they believe the right religion, sometimes to the extent that they think they have the right to dictate to others what to do and what not to do. Numerous occurrences in history prove this. The Inquisition, for example, when Christianity tried taking over the whole European continent, and people would be punished if they do not convert. The same thing with the cartoon controversy.

Humans have the right brain to think. I would really wish that everybody use their brains accordingly, instead of simply following the crowd, and acting irrationally. Yale University Press is publishing a book about the incident that occurred back in 2005. For all intents and purposes, this is a scientific endeavor, so why would Yale back down and remove the cartoons from the book? The official answer that is given is because they fear violence. Wow. This somehow reminds me of Copernicus and Galileo. I didn't expect that a member of the Ivy League would be the first to lead us back to the Dark Ages. 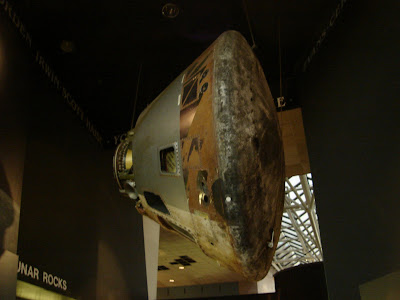 (Weird Vehicle, from my Air and Space Museum Series)