So it is Friday, and it is the end of the first week of this semester. It has been a whirlwind first week, with plenty of happenings and occurrences, but I am glad that it is over, and that it was productive.

Of course, not every happening is good, one such example is the fact that my roommates and I have been told that the apartment will be fumigated, and originally it was scheduled to happen last Monday, which got moved to last Wednesday, which got moved to today. And so far, it still hasn't happened yet. Talk about efficiency. In the meantime, our kitchen stuff are in the extra room, and our bathroom stuff are in the dining room. I am starting to get pissed.

Anyway, other occurrences have been good. One such occurrence was a meeting with a friend who I haven't met in person before, as blogged earlier. With respect to academia however, the good thing is that within the span of one week, I submitted two study protocols to the IRB for review. Isn't that great? I submitted one protocol to the IRB last Monday, and another yesterday. These are two study protocols for two different projects that I am involved with, and we need IRB permission and clearance to conduct these studies beforehand because they deal with human subjects. So hopefully those get cleared by next week, and so we can run our studies in time for the next abstract deadline for a conference.

I also had a few meetings with people here and there, plus met deadlines of stuff that people want from me, such as a list of experiments that I am proposing for my dissertation. I also read a dissertation proposal of a colleague of mine, and she did the same with mine. Finally, since this is a Friday, I had my very first class meeting of the only class I am taking this semester.

So yes, it was a prolific first week, I myself am surprised. That's why I am taking tomorrow off, my good friend and I are heading south to climb over boulders and rocks. We figured that tomorrow would be a good day to do it, since tomorrow is the Fallfest here in the university, where hip-hop artists come over and perform, and the undergraduates and the rest of the people who dig those sort of things will be on campus. We'd rather avoid the crowds, if you know what I mean. 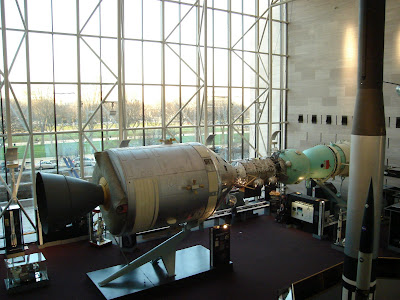 (Rocket Engine, from my Air and Space Museum Series)