A friend of mine and I had this discussion quite recently, about how people take photos and then post them on social networking sites such as Myspace and Facebook.

So, if you're a typical teenager, young adult, or a twenty-something like me, chances are you have an account with a social networking site, such as Myspace or Facebook. These sites allow you to do certain things in cyberspace, and one such activity that I would like to talk about is the fact that people can post their photos online for their friends to see.

Now, if one just takes a random person's account and look at the pictures, there are multiple types of pictures that people post in there. There usually is the travel photo addict, such as me, where all my pictures are pictures of places that I have been to. There are also the select memories picture person, who only posts pictures of events in their lives that are deemed memorable, such as milestones of their children, updated family photos, and such. There is a different group, however, that has a different picture posting activity, and this is what I do not understand. There are people who post pictures of parties they attended, and this includes pictures of them getting drunk together with their friends, partying like there is no tomorrow. Of course, there are multitudes of variations from this theme.

Which brings me to think, why do people post pictures online for their friends to see? First, I would like to answer that question myself, and for me, the motive for posting my travel pictures online serves several purposes. One, it can serve as a memory link, and browsing it later would evoke good (and bad) memories of travel. That however, is a personal reason, which does not justify posting it online for others to see. Two, it can be a way of letting my friends see where I have been to, and to at least let them experience vicariously the experiences that I had. But maybe that is too altruistic a reason, so here's the selfish one. Three, it is a way of proving that one's claims to fame is indeed true. Pictures of exotic places can be proof of one's bragging rights. It's basically saying that I have been to Machu Picchu and I have the pictures to prove it. As far as I am concerned, there is nothing wrong with that.

So what I do not understand is that other people post other types of pictures, like what I described above. Is it a bragging right to let the world know that one has been drunk at a given party? Probably not, given the fact that there are multitudes of technology articles out there warning people against making their photos public, since it can be detrimental to one's life later, such as if one's boss finds out one's indiscretions.

So, what exactly is the reason why people post these photos? One hypothesis that my friend has put forward is the fact that we seek validation from others. By posting pictures online for other people to see, this allows us to prove to others that we are having fun. If being drunk is one's definition of having fun, then showing it to others thus validates the fact that at one point in the past, we had fun. If there are no pictures to prove it, our friends would not know that we had fun.

This somehow boils down to the existentialist question of the falling tree in the forest. If a tree falls down in the forest and nobody was there to see it, does it make a sound? Thus, does one exist if there is nobody out there to verify it? Existence and reality is two-fold in a way. As much as the concept of an absolute reality may seem to be very favorable and ideal, it is not always the case. Simulacra and other types of constructions are very much part of the reality of human beings. Thus, even though we would want to think that there is an absolute reality out there, the human behavior shows that most of the time, this is not what people think. People construct their own reality all the time. People project a certain persona to others. People feed other people information that would then become building blocks of the reality that they want to create, either deliberately, or inadvertently. 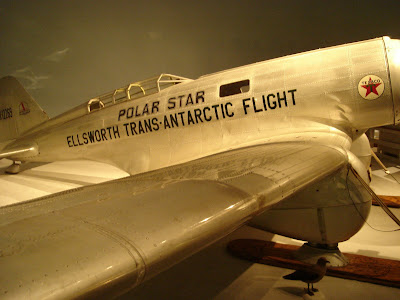 (Polar Star, from my Air and Space Museum Series)