So today finally was the day in which a day that I have been waiting for almost a monh now have finally occurred. Yes, I know, the previous sentence was a run-on sentence, but what the heck.

Anyway, the back story is that during the summer, the downstairs neighbors left food in the house which then triggered a pest control problem. So, sure enough my roommates and I noticed the weird number of bugs and other insects in the house. That sucks. So, we complained to the landlord and so the landlord contracted an exterminating company to deal with it.

So one day, we were told that the exterminator would come at such a day. Before that, we had to empty our kitchen and bathroom of its contents. The kitchen equipment was then relocated to the extra room that we had, and the bathroom stuff is in the dining area.

Anyway, today, it was my turn to wait. The exterminator was scheduled to arrive at noon. 12:30 and he still was not there, although I talked to the downstairs neighbors and they were given a call that the exterminator would arrive in twenty minutes. In the end, he showed up a full hour late. For me, that was unprofessional, but heck, might as well get this over with. I had to skip a lab meeting due to that. But then, hopefully I won't have this problem later.

So yeah, after the weapons of mass destruction were released in my apartment, I had to leave and not enter for the next four hours. Hopefully, the bugs are all dead and massacred by now. 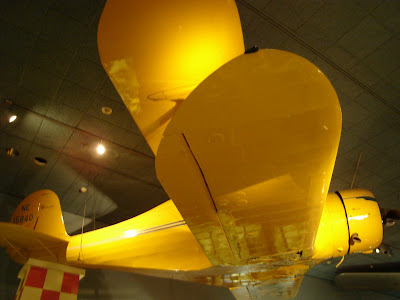 (Shiny Yellow Plane, from my Air and Space Museum Series)